All eyes on Kenya as election campaign enters homestretch

With less than a month to the General Election, Kenya is hard-pressed to assure its neighbours of a free flow of goods on the Northern Corridor, with oil marketers preferring the port of Dar es Salaam for the importation of petroleum products.

Ugandan legislators have been discussing the impact of the polls and have challenged President Yoweri Museveni to assure the country that there are plans to secure its imports.

MPs raised concerns in Parliament on July 12 that Kenya’s August 9 election could impact the landlocked country, which depends on the Mombasa port for most of its imports, and asked the head of state to make public the plans to cushion them from the likely effect of polls in case the aftermath disrupts the supply chain, as was the case in 2007/2008.

They warned that Uganda could face further fuel price increases in the post-election period.

While presenting Uganda’s plan, Junior Minister for Energy Okaasai Sidronius Opolot said the country has increased by 15 percent its fuel imports through the Dar es Salam port since April this year, when Kenya introduced changes in capacity sharing.

The move, Uganda believes, directly affected both the companies doing business in Uganda with investments in Kenya and Kampala’s supply of petroleum products although the country has not yet reached stockout levels.

Now, 80 percent of the country’s petroleum products are supplied through the Kenya route using the open tender system, which Uganda joined in 2011 — a drop from 95 percent in April.

In May this year, Ugandan and Kenyan officials met twice and held talks to resolve the major issue of capacity sharing, given that Mombasa still remains a shorter and cheaper route.

The meetings only managed to get Kenya to adjust its new capacity-sharing ratio for transit from 60:40 to 55:45, forcing Kampala to turn to Dar in June.

Now, Ugandan oil marketers have raised their petroleum loadings out of Tanzania from 5 percent to 20 percent and this has kept the country supplied.

At the start of this month, Tanzania also reduced road toll from $16 to $10 per 100km, a move that will drastically cut transport costs from Dar and attract more Ugandan importers.

“We shall continue to engage the Government of Kenya to keep the supply route active, encourage Ugandan OMCs to further increase their usage of the Tanzania route so as to reduce risks associated with supply disruptions or interruptions and closely monitor the industry to ensure that it continues to thrive in a free, fair and competitive environment,” Opolot said.

Uganda, unlike other regional countries, has not offered any subsidies on fuel, with the Finance ministry saying it could have a long-term negative impact on the economy, for a short-term fix.

The country, which has the highest fuel prices at the pump in the region, said it will continue to focus on supply to allow the interplay of market forces of demand and supply on the pump prices.

“The strategies to keep the country well supplied, therefore, hinge on the effectiveness of the import routes and the in-country storage facilities. In this case, Mombasa and Dar es Salaam ports together with other terminals in Kenya are being utilised by oil marketing companies to import products into Uganda,” Opolot said.

The country is also in the advanced stages of starting transportation of petroleum products on Lake Victoria through Mwanza port in Tanzania and Kisumu in Kenya.

Mahathi Infra Uganda Limited has been developing a system to transport fuel over Lake Victoria by barges and construction of storage facilities of 72 million litres capacity is now complete.

Uganda consumes about 5 million litres of fuel every day.

The company has also completed the assembling of the first barge with capacity of 4.5 million litres and is ready to transport the fuel but the key challenge to operationalise this project remains finalisation of the Oil Spill and Shipboard Pollution Emergency Plans, which are currently under discussion.

The government is banking on this project to kick off by the end of this month, buttressing the country’s preparedness in case of any supply disruptions during Kenya’s electioneering period given that the barge can make two round trips per week.

Kenya government officials say, President Uhuru Kenyatta, who is expected to retire after the polls, considers seamless trade as part of his legacy in regional integration.

Macharia Kamau, Foreign Affairs Principal Secretary, told The EastAfrican President Kenyatta is personally interested in avoiding any chaos that could hurt trade in the region.

“He is personally invested. He has been directly involved in negotiations to open borders, including one-stop border posts, and the proof of that is the skyrocketing trade between members of the East African Community,” he said.

Last week, Trade Cabinet Secretary Betty Maina and her Interior counterpart Fred Matiang’i, in a joint communique, reassured regional partners of the unfettered access to Mombasa port and the Northern corridor after revelations the port had suffered a two percent drop in cargo ahead of elections, partly because of China’s lockdowns to contain Covid-19.

Shippers Council of Eastern Africa chief executive Gilbert Lagat noted that traders still have memories of the 2007/2008 post-election violence that disrupted transport and supply chain on the corridor.

“But they have continued to show confidence since Central Corridor has also not registered any significant growth,” he said, referring to the Tanzania route to the Great Lakes region.

Although contesting political parties in the Kenyan polls say they are for peace, a report by the International Crisis Group last month warned that the result could be contested as long as the vote count is not transparent and especially if the race is close.

Violence has hurt neighbours before, in 2007 and subsequent elections that followed but it has not been as bad as the 2007/2008 when Northern Corridor importers lost goods and business worth hundreds of millions of dollars.

The port of Mombasa assists its wide neighbourhood with imports that include oil, clinker which is used to make cement, steel, bitumen for road construction and second-hand cars, while the main exports include tea, coffee, and horticultural products. Large volumes of cargo are ferried by trucks via the route.

Holding the key to the economic wellbeing of the Northern Corridor countries, the outcome of Kenya’s presidential election will have either ramifications on the route, which will impact trends in intra-regional trade.

Total cargo throughput at Mombasa has increased in the past five years, from 27 million tonnes in 2017 to 34.55 million tonnes, according to the April 2022 Northern Corridor Observatory Report.

This could be reversed if things go wrong at the ballot.

“Ministers from Uganda, Burundi, DRC, Rwanda, and South Sudan, who are the main users of Mombasa port, committed to use the facility during election period only if there is security. The government has done so in writing to all those ministers,” said Mr Nyarandi.

Trade experts argue that any disruption may hit Kenya hard because her neighbours might be forced to look for alternatives, costing it billions of dollars in the end.

Economist Ndiritu Muriithi, who is the Laikipia County Governor said: “The Northern Corridor is the main artery to East and Central Africa. In the 2007/2008 post-election or when parts of the corridor were spoiled, it brought economic disruption from here to DRC.”

Prof X.N. Iraki, who teaches economics at the University of Nairobi, said the corridor must be made a national security priority.

“This transport corridor is the lifeline to Uganda, DRC, Rwanda, Burundi and South Sudan and not forgetting western Kenya and northern Tanzania. It should be secured all the time with or without polls. It is one of the country’s most strategic assets. Remember [the] standard gauge railway and the old rail do not have a significant presence in these regions,” said Prof Iraki.

Political risk analyst Dismas Mokua said Kenya can only secure the Northern Corridor by creating an environment for all registered voters to exercise their democratic right on election day.

“Security agencies using early warning infrastructure must therefore identify areas that are likely to experience insecurity and secure them. Voters have valid expectations that security agencies will secure the entirety of Kenya,” said Mr Mokua.

“Security deployment should inspire confidence and protect the sanctity of the voting process so that outcomes are credible and receive stakeholders’ acceptance. The Northern Corridor must therefore be secured in a manner that inspires confidence,” he added.

The two leading candidates, Deputy President William Ruto and former prime minister Raila Odinga — Kenyatta’s preferred candidate — are locked in a fierce battle to succeed President Kenyatta and have been preaching peace. But there are still concerns that tensions could boil over in the home stretch.

Dr Ruto is a friend of the Ugandan president and was controversially barred by state officials from travelling on a private visit to Uganda last August.

Mr Odinga, an agemate of the Ugandan leader and considered an African statesman, recently called on President Museveni in State House Entebbe in May.

But Museveni has said he has no favourite in the race.

“Support Ruto? We will never do anything like that. We shall never take sides,” he said when asked about his relations with the Kenyan Deputy President.

Kenyan legislator Otiende Amolo, who was part of the legal team for Mr Odinga in the 2017 petition that annulled the presidential election result, says that there are very limited chances of violence — as long as the main contenders undertake to accept the result.

Data from the police Inspector-General’s office shows that election violence cases have reduced to about a quarter of what was recorded in run-up to the 2017 polls.

Still, there are factors that could lead to violence. The most important is the question of the capacity of the Independent Electoral and Boundaries Commission (IEBC) to conduct free and fair elections.

Currently, there are questions whether the IEBC has corrected the mistakes that led the Supreme Court to nullify presidential election result in 2017. Mr Odinga two weeks ago alleged that there were plans to print extra ballot papers that would be marked in Uganda in favour of Dr Ruto. Both IEBC chairperson, Wafula Chebukati and Dr Ruto dismissed the allegations.

The other concern is the increase of misinformation and disinformation on social media by the supporters of the key candidate in order to influence the voters in their favour.

Elsewhere, corporate managers are more concerned about the earning prospects of their businesses in the next 12 months due to the election fears, which they say add to inflation and global uncertainties. A survey by the Central Bank on company chief executives shows that the managers are worried about increased political uncertainty in the run-up to August 9, cost of doing business and the economic environment (stability of the Kenyan shilling and inflation).

“Reduction in the number of infections experienced in the past few months has however resulted in Covid-19 becoming a lesser concern,” said to the survey carried out in May.

But, increased political uncertainty is of greater concern for firms in the services sector while those in manufacturing are watching the economic and business environment, reduced consumer demand, increased taxation and exchange rate depreciation.

In the agriculture sector, investors are more concerned about supply chain disruptions and political uncertainty.

“The elections are expected to slow down demand/orders and production volumes for majority of respondents (firms),” the survey says.

CEOs cited stable economic environment, political stability, and stability of the Kenyan shilling as top external factors across all sectors that businesses anticipate could strengthen their company outlook over the next 12 months. 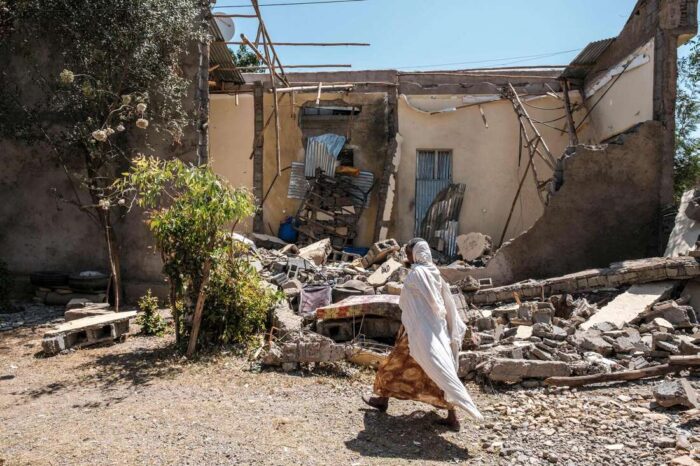