Angolan President Joao Lourenco vowed to push ahead with economic reform and hailed voters’ “tolerance” as he was sworn in on Thursday for a second term after a divisive electoral win.

Amid tight security, Lourenco pledged to be “president for all Angolans” at a colourful ceremony held at the historic Praca da Republica square in the capital Luanda.

“Congratulations for the patriotism and high degree of tolerance, and civility shown in what are already considered the most disputed general elections in the history of the young Angolan democracy,” he said in his inauguration speech.

“Angolans have demonstrated to the world that at crucial moments, they know how to make the best choices and choose the future of their country with great responsibility”.

He said that by electing him and his party, Angola had chosen “continuity” and will be guaranteed “stability” as he pointed to further economic liberalisation in a country ruled since independence by a historically socialist party.

He promised to push ahead with reforms to encourage the private sector, expand the offer of goods and services and fight youth unemployment.

“We as a country have a clear option for democracy and a market economy.”

Security forces set up a heavy cordon around the venue, a move which the main opposition party, UNITA, said aimed at stifling dissent.

The 68-year-old former general returned to power after elections on August 24 gave his Popular Movement for the Liberation of Angola (MPLA a thin majority, winning just 51.17 percent of the vote.

It was the MPLA’s poorest showing in the oil-rich country it has controlled since independence from Portugal in 1975.

Lourenco also promised to increase wages, including for the armed forces — receiving cheers from the crowd.

The guest list for the swearing-in ceremony was limited to some 15,000 selected Angolans. Around 50 foreign leaders or their representatives were also invited.

Many Angolans stayed at home, with less traffic on the streets than usual and fewer vendors hawking their wares.

Opposition parties and civic groups say the vote was marred by irregularities, but a legal challenge by UNITA to overturn the result was tossed out.

Observers from other parts of Africa praised the peaceful conduct of the polls but raised concerns over press freedom and the accuracy of the electoral roll.

UNITA — a former rebel movement which fought a bitter 27-year civil war against the MPLA government — notched up 43.95 percent of the vote, up from 26.67 percent in 2017.

Under its charismatic leader Costa Junior, 60, the party proved popular in urban areas and among young voters eager for economic change.

It did particularly well in the capital, where it won a majority for the first time.

Costa Junior did not attend the inauguration and has called for protests.

Lourenco first came to power in 2017 when, as defence minister, he took over from long-time ruler Jose Eduardo dos Santos.

He was bequeathed a country deep in recession and riddled by corruption and nepotism.

He swiftly turned on his predecessor, launching an anti-graft campaign targeting dos Santos’s family and friends, which some critics say was a political stunt.

He also embarked on an ambitious reform programme to lure foreign investors and diversify the economy.

But that has so far failed to brighten the prospects of many of Angola’s 33 million people who are mired in poverty.

“The president speaks well but always makes a lot of promises. We only want our lives to improve, better wages, food on the table, access to schools and hospitals, more jobs,” said Luiza Basic, a school teacher in Luanda.

Dos Santos died in Spain in July. State funerals for the late strongman were held in August in the same square where the inauguration took place.

Analysts see little change between Lourenco and his predecessor.

“There is not much difference between (the two… in terms of respect for human rights and fundamental freedoms,” said Borges Nhamirre, a researcher at the Pretoria-based think-tank Institute for Security Studies. 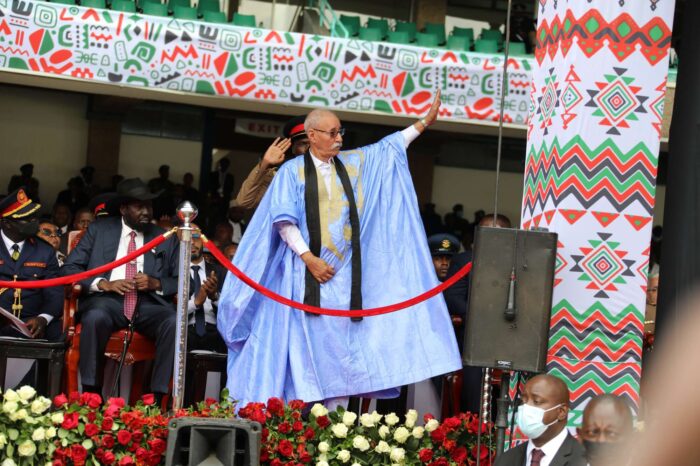