US President Joe Biden was not always seen as interested in Africa. His first meeting with an African head of state at the Oval Office – Kenya’s Uhuru Kenyatta – did not come until October 2021, nine months after he took power.

This week, however, he sought to reaffirm Africa’s central position in his diplomatic agenda, gathering leaders and delegations from 49 African countries in Washington under the US-Africa Summit.

But the summit, whose first edition was held by Barack Obama in 2016, was always going to be seen as a catch-up bid to China’s Forum on China-Africa Cooperation (Focac. Japan and the European Union, too, have similar summits, all pledging to help Africa.

On Friday, US Secretary of State Antony Blinken launched a new Office of China Coordination, informally known as China House, as the US intensified pressure to counter growing Chinese influence globally.

“China House will ensure the US government is able to responsibly manage our competition with the People’s Republic of China (PRC and advance our vision for an open, inclusive international system. Our goal in creating China House is to help deliver on elements of the Administration’s approach to the PRC,” the US said in a statement.

“The Secretary and Department leadership are committed to ensuring we have the talent, tools, and resources to successfully execute US policy and strategy towards the PRC as the most complex and consequential geopolitical challenge we face.”

Earlier on Thursday, President Biden had said that Washington wants to engage with the continent based on African priorities.

“I’m looking forward to hearing more from all of you about the issues and priorities that matter most to Africa, and how we can deepen our co-operation. And I emphasise cooperation,” he said at the Session on Partnering on African Union’s Agenda 2063.

The Agenda 2063 is the continental vision mooted in 2013 to see a more developed, more integrated and more peaceful Africa by 2063.

The vision targets more electricity, silencing of guns, more roads and bridges and more education for the continent’s children.

President Biden said Africa will determine its own path on the priorities. But he stuck to an old line: That human rights violators and poor governors won’t get a seat at the cooperation table.

“The choices that we make today and the remainder of this decade and how we tackle these challenges, in my view, will determine the direction the entire world takes in the decades to come,” he told the session that included East African leaders William Ruto (Kenya, Samia Suluhu (Tanzania, Yoweri Museveni (Uganda, Paul Kagame (Rwanda and Evariste Ndayishimiye (Burundi.

The forum also featured officials of the African Union as well as US investors.

“African voices, African leadership, African innovation all are critical to addressing the most pressing global challenges and to realising the vision we all share: A world that is free, a world that is open, prosperous, and secure,” the US leader said.

But in Africa, bad apples have always had alternatives. As the continent attracts attention from Russia and China, the US regime of conditional cooperation could yet play catch-up. Beijing, for instance, disbursed $153 billion to Africa’s public institutions between 2000 and 2019, according to official data, with most of the money going to infrastructure development in countries that have signed up on the Belt and Road Initiative (BRI. More than half of current infrastructure projects on the continent are financed and/or constructed by the Chinese.

Beijing has a Special Envoy for the Horn of Africa, a position created earlier this year to spearhead peace efforts. Their version of peace efforts, an official Chinese policy paper explains, is to send doctors and engineers, not guns to the battlefields in Africa.

All this, however, may matter only to the global powers. Which is why Kenya’s President William Ruto on Thursday asked Washington to think more of Africa as an investment partner rather than a market for US goods.

Washington, Dr Ruto said, must “review its economic partnership with Africa, because Africa must be regarded as an investment destination, and not a trade destination market for manufactured goods.”

President Biden has been talking of less aid and more trade.

On Wednesday, the US Trade Representative Katherine Tai signed a Memorandum of Understanding on Cooperation for Trade and Investment with the African Continental Free Trade Area’s Secretary-General Wamkele Mene.

Tai later said the MoU will “recast policy priorities such as democracy and governance, peace and security and sustainable trade and investment as avenues of strengthening cooperation on shared global challenges.”

And, through the Prosper Africa programme, the US announced it will commit $170 million to five US and African companies and investors to transform African supply chains and boost African exports to the US by $1.4 billion.

On the side-lines of the US Business Forum (USBF, Benin and Niger signed the first-ever MCC programme worth $504 million for their common transport infrastructure development.

Overall, President Biden indirectly splashed an estimated $55 billion in pledges to a continent that is torn between the effects of Covid-19, crippling inflation and the effects of the Ukraine-Russia war, which have driven food and fuel costs beyond the reach of over 1.4 billion people.

Africa, however, is not up to free lunch. While the continent has largely remained poor due to poor political leadership, lack of finance resources and decades of exploitation by former colonial masters, it has 40 percent of the world’s gold and up to 90 percent of its chromium and platinum. It boasts the largest reserves of cobalt, diamonds, platinum and uranium in the world, critical metals in today’s industrial and technological revolution.

“That’s why, over the next three years, working in close cooperation with the United States Congress, we plan to commit $55 billion in Africa to advance the priorities we share and to support the Agenda 2063,” President Biden said.

That number represents a comprehensive commitment from the US to invest in Africa’s people, infrastructure, agriculture, health system, security and more.

During the three-day summit, President Biden unveiled a series of initiatives, with more than $15 billion in two-way trade and investment deals.

Washington highlighted the need for Congress to renew the African Growth and Opportunity Act (Agoa, which gives African businesses duty-free access to the US.

US waives most tariffs on goods from sub-Saharan African under Agoa, a law that is set to expire in 2025 if the US Congress does not renew it.

The challenge now on is for Africa to learn what to sell in the US, given the stringent quality conditions.

In the past, countries like Rwanda, Ethiopia and Burkina Faso have been removed from Agoa for alleged rights violations. Rwanda rejected second-hand clothes, tied to its selling anything to the US under Agoa, and got sanctioned.

Tai on Wednesday chaired an Agoa ministerial meeting, with Trade ministers underscoring the importance of the US-Africa economic relationship in addressing the continent’s challenges.

“As (former President Clinton said, Agoa was established by our Congress to facilitate economic growth and development throughout the continent, and to fully support Africa’s extraordinary potential,” she said.

“Agoa’s promise as a stepping stone to address regional and global challenges is a compelling reason to gather today and to chart a path to run together in the right direction.

The United States Trade Representative disclosed that since Agoa’s birth 22 years ago, it has received consistent bipartisan, bicameral support from both the Democrats and Republicans.

“And I believe that the robust participation as we see here today from our Members of Congress – taking time from their busy schedules at this busy end-of-year period – is testament to the continuing support of our legislators for a close and supportive trade and investment relationship with the continent,” she said.

Tai cited Kenya’s President Ruto’s energy and focused leadership in creating more trade opportunities with the US. Under Donald Trump, Washington launched talks on a bilateral trade deal with Nairobi, but Biden administration ditched it. This would have been the second free trade deal the US has signed with an African country, after Morocco.

Kenya’s Trade Cabinet Secretary Moses Kuria says the deal was still on the table, despite faltering of the negotiations.

“The elements in the MoU that was signed (on Wednesday between the US and the AfCFTA are mostly the same ones we are discussing now,” Kuria told The EastAfrican in Washington. “The issues of inclusivity, SMEs and gender are the same on the MoU.”

“I’m asking the Congress for the authority to lend $21 billion to the International Monetary Fund to provide access to necessary financing for low and middle-income countries – which is so difficult to come by now – to help Africa’s recovery efforts and support projects that build resilience against future crises,” Biden said.

“In addition to our investments, we’re also committed to helping African countries assess the financing you need to build sustainable and inclusive economies.” On debt, he said: “We’re leading a global effort to pursue equitable arrangements for global creditors to provide debt relief so nations can prioritise their people, not back-breaking debt payments.”

There were geopolitical plans. President Biden says the US fully supports reforming the UN Security Council to include permanent representation for Africa.

In spite of passing more binding resolutions on Africa than anywhere else, Africa has no veto-holding member in the Council. Global powers like China and Russia had voiced the same, but UN members cannot agree on what to change in the Council.

“Today I’m also calling for the African Union to join the G20 as a permanent member of the G20. It’s been a long time in coming, but it’s going to come,” he said. 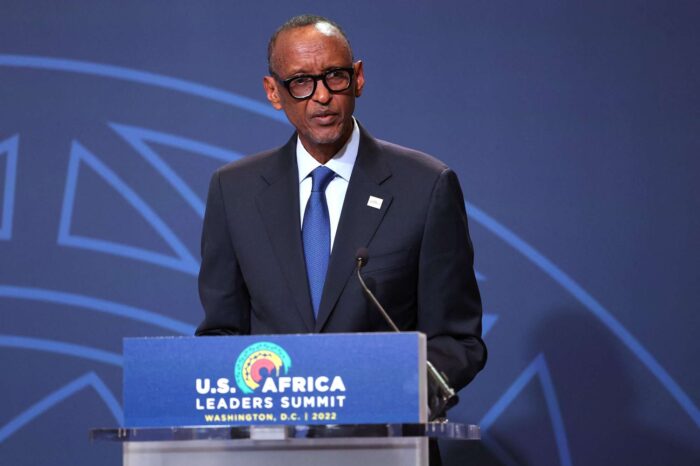 Kagame defends Africa’s right to a partnership with China