The demand came as East African Community was on Friday laying the ground for resumed dialogue on the crisis in the Democratic Republic of Congo, due in Nairobi, as the region holds it collective breath on a ceasefire call to M23 rebels.

The ceasefire call gave the group up to 6pm local time on Friday as a precondition for dialogue. But by Friday afternoon, nothing had been heard from M23 and sources told The EastAfrican that the group will not be allowed to participate in the Nairobi talks as long as they don’t heed the ceasefire call. In fact, Kenya on Friday sent its final batch of troops to the DR Congo where they were to wait for a call on whether to venture into into Bunagana, Rutshuru and Kiwanja areas that have been under M23 occupation.

However, by press time M23 Spokesperson Lawrence Kanyuka, indicated that they were willing to join the dialogue as long as Congolese forces do not attack them.

“We are always ready for a direct dialogue with the Congolese government to resolve the root causes of conflicts,” he said.

The plans for the resumption of peace talks followed an ultimatum issued by mediators this week, and there are indications that there are ‘’good signs’’ of the M23 rebel group heeding the call to lay down arms and allow for dialogue. But at the same time, the EAC was putting its East African Community Regional Force (EACRF on standby to force the rebels to surrender.

“If M23 does not withdraw, the EAC Heads of States shall authorise use of force to compel the group to comply,” reads the ultimatum in the communique released on Wednesday after a mini-summit of leaders in the Angolan capital Luanda.

The Heads of States — Presidents Evariste Ndayishimie of Burundi, Felix Tshisekedi of DR Congo and João Lourenço of Angola — met at the first ever joint mini summit between the East African Community and the International Conference on the Great Lakes Region (ICGLR, specifically seeking to tackle the DR Congo crisis. Uhuru Kenyatta attended as the mediator of the DR Congo conflict on behalf of the East African region. Rwanda was represented by its Foreign Affairs Minister Vincent Biruta. Uganda was not.

Others were Michelle Ndiaye, Special Representative of the Chairperson of the African Union Commission and Head of the African Union Liaison Office in the DRC, João Samuel Caholo, Executive Secretary of ICGLR and Lt-Gen Nassone João, Commander of the Ad Hoc Verification Mechanism.

After the meeting chaired by President João Lourenço, the African Union’s appointed mediator, the leaders urged the M23 to “to cease fire and withdraw from occupied territories.”

According to the schedule seen by The EastAfrican, Nairobi will host another inter-Congolese dialogue between government officials, community leaders and different ethnic groups from the DR Congo as part of the Nairobi process.

The meeting will be chaired by Kenyatta, and attended by officials from the EACRF.

The Nairobi process is focused more on talks between the rebels in DR Congo, local community and the Kinshasa government with a view to ending internal hostilities while the Luanda-process is aimed at mending the diplomatic tiff between Rwanda and DR Congo.

The government in Kinshasa has refused to engage with the M23 group, which it calls a “terrorist movement”, as long as it occupies territory in DRC.

“We have received positive information that they have begun to pull out. Of course they are raising own security concerns,” a source familiar with the Luanda discussions told The EastAfrican.

After the call for ceasefire, the rebel group had suggested the mini-summit decision did not concern them. However, they insisted they are engaging the Congolese military with which they should call a truce, were it to work.

At a media briefing in Kinshasa on Thursday, Congolese Foreign Minister Christophe Lutundula said: “Tomorrow, 6pm, the M23 must stop all its attacks.”

The rebels respond: “If tomorrow at 6pm (1600 GMT, or in the morning, the government doesn’t attack us, we will still be there (for talks.”

M23 rebels had been dormant for years, but took up arms late last year and have been seen from the start by Kinshasa as actively supported by Rwanda, which denies the charges. They are now the most formidable group, even though eastern DR Congo has more than 120 active armed groups.

At the Luanda mini-summit, leaders agreed to set up a disarmament and cantonment of the M23 in Congolese territory under the control of the Congolese army (FARDC, the regional force and the ad hoc verification mechanism, with the collaboration of Monusco, the UN peacekeeping forces.

“During the disengagement and withdrawal of the M23 to its initial positions, Kenya will deploy its contingents to Goma, then Bunagana, Rutshuru, Kiwandja,” the mini-summit communique reads. These territories are currently under M23 control, except for Goma and part of Rutshuru.

They also asked foreign armed groups operating on Congolese soil, notably FDLR-Foca, RED Tabara, ADF and others to lay down their arms immediately and undertake their unconditional repatriation.

This Luanda meeting came nearly a week after President Paul Kagame of Rwanda promised Mr Kenyatta to assist in prevailing upon M23 to stop fighting. Rwanda has consistently denied any allegations of supporting the rebel group. 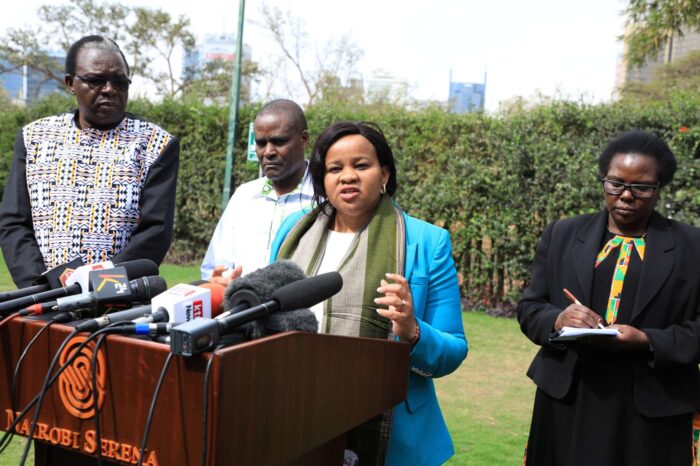