Ethiopia, Tigray sign deal in Pretoria for cessation of hostilities

The Ethiopian government and rival Tigray People’s Liberation Front (TPLF forces, who control the northern Tigray region, on Wednesday signed a “permanent cessation of hostilities” deal in a bid to end one of Africa’s recent bloodiest civil war.

According to the signed agreement, the warring parties will cease hostilities and “silence guns in principle” in the war-torn Tigray region, and work on ending the two-year old war “without delay.”

The signing of the agreements, which came after ten days of intense negotiations, marks an important milestone in the African Union-led mediation process that began on Tuesday, October 25, in South Africa, in pursuit of a peaceful solution to the conflict that has gripped the Horn of Africa’s nation.

According to AU, the two sides agreed to a disarmament plan as well as unhindered access to humanitarian supplies and resumption of halted basic services to Tigray.

The agreement also offers the “assurance of security for all concerned inside and outside Ethiopia”.

“We have now signed an agreement. We will leave the past behind us. Making peace has proved elusive. Hundreds of thousands have died,” said Tigray’s Getachew Reda at the signing ceremony.

“Thousands of combatants and civilians have lost their lives. We will do all in our power to expedite this agreement. We look to our brothers in Addis Ababa to do the same.

“This war was imposed on us. Now that we are here to sign an agreement, I hope both parties honour this agreement. We have made concessions so that we can build on the trust. Signing is one thing, implementing is another. We hope the monitoring will be an iron-clad one,” he added.

And Ethiopian Ambassador Redwan Hussine said, “The level of destruction is massive. We thank our brothers from the other side [for agreeing] to put this period behind us. We have started an inclusive dialogue process.”

South Africa’s Foreign Minister Naledi Pandor said, “We humbly call on both sides to implement this agreement in full. It must lead to an enduring peace. We will support the AU and the facilitation team.”

In a tweet, Intergovernmental Authority on Development (IGAD Executive Secretary Workneh Gebeyeh expressed his deep satisfaction at the signing of the Ethiopia peace agreement in Pretoria and congratulated Ethiopian Prime Minister Abiy Ahmed’s leadership, mediation teams, and the AU for what he said was “a momentous outcome to silence the guns”.

IGAD has also played an active role in the AU-led mediation efforts.

Both parties said that they were committed to implementing a cessation of hostilities effective immediately.

The AU-led peace talks, which started on Tuesday, were scheduled to end on Sunday, October 30, but were extended as parties continued engaging in discussions.

The US government said on Monday that the extension of the peace talks was an “indication that the parties arrived in South Africa with quite a bit of distance between them”.

“But it’s also an indication that the parties continue to be willing to sit down together in what we hope to be a constructive atmosphere and ultimately an atmosphere when the parties can discuss their differences and continue to narrow the distance between them,” the US said.

The talks were held without direct participation of Eritrea, a party to the Tigray conflict, but Asmara was indirectly represented by Ethiopia.

According to some diplomatic sources who spoke to The EastAfrican, Eritrean concerns were being discussed at the talks in Pretoria.

As conditions for peace, the Tigray rebels have previously demanded the restoration of basic services such as access to telephone, electricity, internet and banking services to the region, unrestricted aid access and the withdrawal of Eritrean forces.

The US government was also actively supporting the peace process through its Horn of Africa envoy Mike Hammer who flew with Tigray’s mediators to South Africa in a US military plane.

Since its breakout in November 2020, the Tigray conflict has claimed the lives of tens of thousands, uprooted millions and caused a grave humanitarian crisis, making 90 per cent of the estimated seven million Tigrayan population to be aid-dependent, besides huge destruction of property.

According to the US ambassador to the United Nations Linda Thomas-Greenfield, “as many as half a million” people have been killed in the conflict. 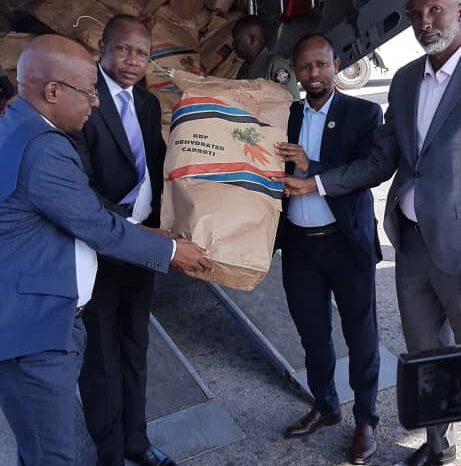