Rights watchdogs and the international community are keeping an eye on the conduct of the Kenya police, arguing that their actionduring this election season is critical to causing or averting violence.

This year’s elections have been described as critical, and international players are watching to see if Kenya has graduated from the pattern of post-election violence since 1992.

In 2017, protests in Kisumu were blamed for several deaths, including that of a six-month-old baby, who was bludgeoned by police as they hunted for demonstrators in their homes. Police have heavily deployed in areas seen as potential hotspots, including Nairobi, Kericho, Nakuru, Kisumu, Uasin Gishu and Mombasa.

The National Cohesion and Integration Commission (NCIC has mapped the six counties as likely to experience violence during the polls. These have in the past experienced violence triggered by hate speech, fake news and non-acceptance of election results.

Joining in the calls for peace is the US, which has called on Kenyans to use the opportunity to showcase their democracy to the world as they make their voices heard in their elections.

“We urge a peaceful and transparent democratic process, which is critical to delivering a more prosperous and secure future for all Kenyans,” said US Secretary of State Antony Blinken in a statement on Wednesday.

The statement came hours after the US Embassy in Nairobi issued an alert imposing movement restrictions on its citizens and staff in Kisumu County over possible violence, for which it received a lot of flak.

Later, it clarified that it had no specific intelligence about violence but was simply cautioning staff from touring one of its outposts in the country at this time.

“Kisumu hosts a significant number of US Embassy personnel and is a frequent travel destination for American citizens. The US Department of State had no greater responsibility than the safety and security of US citizens overseas and routinely issues security alerts surrounding elections, health conditions and extreme weather ensuring US citizens have information that helps inform travel plans,” said a statement from the embassy.

But rights organisations say police could influence post-election events. The Kenya National Commission on Human Rights (KNHCR says that, based on past highly competitive elections, violence is likely to occur in the top candidates’ strongholds as tension rises over the results.

Despite assurances by the government that the elections will be peaceful, Kenya’s neighbours remain jittery as they have been every election time since 2007 when Ugandan and Rwandan traders lost goods worth $50 million to vandalism and transport disruptions on the Northern Corridor.

The months leading to, and after elections, are violent in Kenya due to the rise in inflammatory political rhetoric and ethnicised narratives that cause divisions and hate among the public. According to the KNCHR, supporters of strong candidates who lose in the polls are likely to turn violent, especially if the leader does not accept the results.

“The commission, therefore, calls on sufficient contingency measures by all actors, including the Inspector General of Police, to deploy additional security to these areas, and swiftly, in line with human rights principles and standards, contain any such incidences before they escalate,” said KNHCR chairperson Roseline Odede.

In its latest monitoring report released Wednesday, the commission cites five deaths related to political violence between February and August this year. Two of the deaths were as a result of road accidents involving vehicles associated with aspirants, while three died from injuries inflicted by members of opposing factions.

Twenty-eight assault cases were reported by both police officers and members of the public in Nairobi, Kericho, Kisumu, West Pokot, Isiolo, Mombasa, Bungoma and Kisii counties, and 44 cases of threats, harassment and intimidation.

Longstanding conflicts between communities in the Kerio Valley are likely to impact voting patterns in the region, with the commission warning that it is likely to lead to voter suppression, as some affected localities have seen residents displaced and relocated from their polling stations while those left behind are apprehensive about their security should they choose to remain and cast their votes.

These areas include Mandera County, where political opponents are said to be disguised as terrorists to attack opponents’ motorcades with guns and or improvised explosives; Nakuru County, where an operation to wipe out members of a local gang has been cited as causing tension; and pasture-related conflict in Elgeyo Marakwet County. Seventy-three cases of inducement and undue influence have also been reported by the commission in Nairobi, Bungoma, Isiolo, Kakamega, Kiambu, Kilifi, Kirinyaga, Kisumu, Kwale, Meru, Migori, Mombasa, Nakuru, Nandi, Nyamira, Nyeri, Samburu, Siaya, Uasin Gishu, Wajir and West Pokot counties.

Data from the Inspector General of Police shows that election violence cases have reduced to about a quarter of what was recorded in 2017. 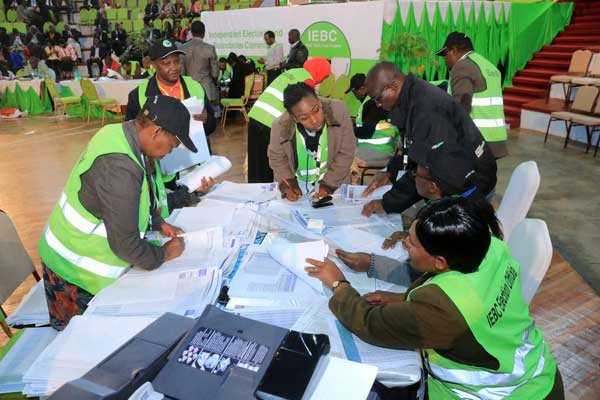