The capital of the northern Ethiopian region of Tigray was hit by an air strike around midnight Tuesday, Tigray rebels and hospital officials said, the latest such attack reported in just a few days.

The bombings came after a resumption of fighting on the ground between government forces and the Tigray People’s Liberation Front (TPLF last week.

The renewed clashes have shattered a five-month-old truce and cast a pall over efforts to try to end the nearly two-year conflict in the north of Africa’s second most populous country.

“Casualties are arriving to Ayder Hospital,” he said, without giving details.

Ethiopian government officials were not immediately reachable for comment.

Prime Minister Abiy Ahmed’s government and the TPLF have each blamed the other for the fighting that erupted last Wednesday in areas bordering the southeastern tip of Tigray.

At least four people including children were killed Friday in the first air strike on Mekele in many months, an attack condemned by the UN children’s agency UNICEF.

Tigrayan rebels had accused the government of hitting a residential area and a kindergarten.

But Addis Ababa said only military sites were targeted and accused the TPLF of “dumping fake body bags in civilian areas” to manufacture outrage.

Access to northern Ethiopia is severely restricted and it is not possible to independently verify the situation on the ground or the claims by the warring sides.

“We are fighting a defensive war,” Getachew said earlier Tuesday at a press conference broadcast online, adding: “We will remain open for any negotiations.”

Residents, as well as diplomatic and humanitarian sources, have said that in recent days TPLF fighters have pushed about 50 kilometres (30 miles south from Tigray into Amhara and to the southeast into Afar, sending many people fleeing.

“We have defended our positions and we are now launching a counter-offensive,” Getachew said.

“Abiy keeps making miscalculation after miscalculation, he keeps sending reinforcements and we’ll continue to neutralise (them and that will take us probably deeper and deeper into Amhara region.”

Abiy’s government announced Saturday that federal forces had pulled back from Kobo, which lies about 15 kilometres south of Tigray, to avoid “mass casualties”.

Getachew said Tuesday a significant part of the North Wollo zone in Amhara was in rebel hands although the TPLF did not want to control the area.

In response, the Government Communication Service said: “The federal government is still committed to the peaceful resolution to the conflict that was once again initiated by the TPLF terrorist group.”

A local NGO active in Afar, the APDA, said on Twitter about 18,000 people had been displaced by fighting, mainly women and children, and that roads in one area were “clogged with fleeing people”.

It said the TPLF was apparently advancing towards Keliwan, a town in Afar to the east of Kobo, and that people were evacuating.

The war, which erupted in November 2020, has killed untold numbers of civilians and left millions in need of humanitarian aid across the north.

Since the latest combat flared, the international community has issued appeals for restraint, including from UN chief Antonio Guterres and the African Union.

Guterres’ spokesman Stephane Dujarric confirmed last week that he had spoken to Abiy as well as TPLF leader Debretsion Gebremichael to call for an immediate cessation of hostilities and “the creation of conditions to restart an effective political dialogue”.

Debretsion disclosed last week that “two rounds of confidential face-to-face” meetings with top civilian and military officials had taken place, the first acknowledgement by either side of direct contacts.

But the rivals have been at odds over who should lead negotiations, with Abiy’s government saying the AU should broker any dialogue while the TPLF wanted Kenya’s outgoing President Uhuru Kenyatta to mediate and has also called for the restoration of basic services to Tigray.

The March truce allowed the resumption of international aid convoys to Tigray after a three-month break, while the region remains without access to basic services and struggles with food shortages.

Abiy, a Nobel Peace laureate, sent troops into Tigray to topple the TPLF in response to what he said were rebel attacks on federal army camps.

The TPLF mounted a comeback, recapturing most of Tigray in June 2021 and expanding into Afar and Amhara, before the fighting reached a stalemate. 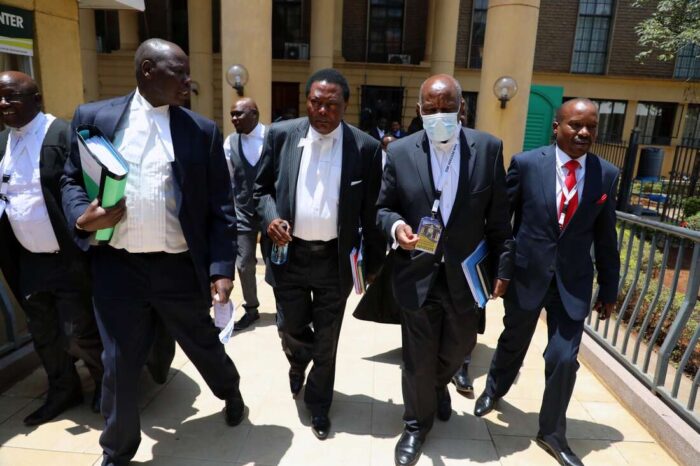 88 top lawyers battle it out in Kenya election petition