Regional force ready to replace Monusco without its mistakes

These past few days have seen a flurry of activities from heads of states meetings and phone calls to diplomatic pronouncements and deployment of boots on the ground, all toward making the DR Congo peace process work.

But the most telling movement of the process came to light on Friday via a brief media release by the Office of the EAC Facilitator Nairobi-Process.

It says that in a telephone conversation with the facilitator Kenya’s retired president, Uhuru Kenyatta, Rwanda’s President Paul Kagame ‘‘agreed to assist [Kenyatta] to urge M23 to ceasefire and withdrawal from captured territories in line with the proposals given by the regional Chiefs of Defence Forces in Bujumbura.’’

President Kagame’s pledge is the closest the process has come to having a breakthrough in the push for peace in eastern DR Congo, and all that Kenyatta needed to make gainful moves with other players in the process.

On the ground, the East African Regional Force (EARF is slowly taking shape, ready to take over roles of the United Nation’s Mission in the Democratic Republic of Congo (Monusco, in an ambitious programme by East African Community leaders to bring peace to eastern DR Congo.

This week, Kenya’s second batch of troops to the EARF arrived in Goma, part of a contingent made up of forces from Uganda, Burundi and South Sudan, forming EAC’s first enforcement mission in the DR Congo.

Monusco, the French acronym for the United Nations Organisation Stabilisation Mission in the DR Congo, is due to exit next year, but currently, its presence in the country is causing more unrest that peace, with civilians accusing the soldiers of not doing enough to stop rampant killings by militias.

Military officials in charge of the EARF have therefore been quick to say that they would want to avoid Monusco’s mistakes.

In a plan seen by The EastAfrican, the EARF will address the problem of clashing mandates with Monusco, first by working together on guidelines and collaborating on security backup before finally taking over its roles.

On Wednesday, EACRF’s Commander, Maj-Gen Jeff Nyagah said the Force’s immediate plan is to secure the strategic city of Goma — which is also the Force’s headquarters — from rebels as they await the completion of the Nairobi and Luanda process; two related diplomatic pushes by the EAC and the African Union respectively, to open dialogue.

“Our priority first is to the political process of Luanda and Nairobi,” Maj-Gen Nyagah told a media briefing on Wednesday in Goma. “The disarmament and mobilisation of armed groups will follow and the reintegration of displaced persons displaced in North and South Kivu in addition to opening up of humanitarian aid routes to the affected populations.

“In the event of the failure of these schemes, we will call on force action. We have deployed more capabilities so that we are able to undertake operations as the situation may dictate,” he said.

The Force says it will stay impartial and observe international law but ensure that “everybody complies with the mandate as provided.”

EARF and Monusco are to develop a framework to guide on modalities of airspace control, sharing of intelligence, communication, air capabilities and designating areas of operation to avoid a clash of mandate as multiple battalions meet in DRC for the peace enforcement mission.

Already, the DR Congo has warmed up to the EARF.

Congolese Foreign Affairs minister Christophe Lutundula said the government was intent on fast-tracking Monusco’s withdrawal from the country hinting at a probable withdrawal before the 2024 initially set deadline.

“A good neighbour is one that attends to your call for help. We are happy and grateful to Kenya Defence Forces for agreeing to join hands with us in this fight for the sake of our country and citizens,” Lt Col Njike Kaiko Guillaume, the Congolese army chief said while welcoming KDF soldiers last Saturday. The first move will be to secure the Rutshuru area in North Kivu, which has been invaded by M23 rebels forcing civilians to flee.

As EACRF kicks off its mandate there is also the question of whether a common force command with Monusco should be established after the retirement of Lt-Gen Marcos De sa Affonso Da Costa of Brazil whose term is coming to an end.

Should the entire eastern DR Congo come under the command of the EARF, it could be the first direct security obligation from the region with direct political, social and economic interests.

Monusco’s current military strength stands at 14,000 soldiers according to UN data release in June this year, making it one of the largest UN peace-keeping missions in the world.

Initially, Monusco’s mandate was limited to protecting civilians and consolidating, however it has since been extended to include the use of force with the establishment of the Force Intervention Brigade (FIB under the UN flag.

Monusco’s mission has been tainted by protests in DR Congo with both Congolese politicians and civilians accusing it of inaction.

EACRF will, therefore, be judged by its ability to end current hostilities, facilitate a peaceful electoral process next year as well as its humanitarian response.

Uganda, Burundi and South Sudan are sending two battalions each, Kenya one battalion of 900 soldiers. The Force will face over 120-armed rebel groups. So far, only Burundi, Uganda and Kenya have signed the Status of Force agreement that includes the mission’s Rules of Engagement.

The timetable for full deployment is classified, but Burundi and Kenyan forces are already on the ground. The Force’s overall mandate is peace but there are also national interests ranging from the need to stop terrorist groups from setting base here, opening up of new markets and stopping displacement that creates refugees.

Tanzania’s commitment in deploying troops has been unclear but it also harbours interests of realising its project of having the 1,457km-lomg standard gauge railway connect DR Congo via Burundi.

Rwanda’s strained relationship with DR Congo following claims by Kinshasa that it has been supporting M23 rebels, has not in any way stopped it from wanting to participate in the mission to control the situation with its nemesis, Defence Forces for the operation of Rwanda, Ex-Armed Forces of Rwanda, Hutu affiliated rebels and Interharamwe militia from destabilising the country.

Rwanda constantly denies the oft repeated Kinshasa charge that it supports M23, but this week, US Secretary of State Antony Blinken of State called on Kigali “to take steps to facilitate de-escalation” in eastern DR Congo where Congolese forces are fighting M23.

Mr Blinken and Rwanda’s Minister for Foreign Affairs Vincent Biruta engaged in private talks on the margins of the G20 Summit in Bali, Indonesia.

“I underscored the United States’ deep concern about the continuing violence in eastern DRC, and called on Rwanda to take active steps to facilitate de-escalation,” Mr Blinken tweeted.

Mr Biruta said, “I reiterated Rwanda’s commitment to the regional Nairobi and Luanda mechanisms to bring peace and stability to Eastern DRC and the region, and the need for all concerned parties to work towards a political solution to the crisis.”

The M23 rebels captured key cities in north Kivu last month, and they have clashed with Congolese forces as they advance towards the key town of Goma that borders Rwanda.

EACRF’s first six months of operation will be under constant reviews to monitor if it is achieving the desired milestone of returning normalcy to DRC.

As the rebels advanced, Angolan President João Lourenço jetted to Rwanda last week where he held private talks with President Paul Kagame over the rising tensions with DRC.

President Lourenço is the chair of the International Conference on the Great Lakes Region (ICGLR, which developed the so-called Luanda Roadmap that calls for both countries to respect each other’s territorial integrity and stop supporting rebels.

The meeting, however, ended in unclear circumstances and the two leaders did not host a press conference as is customary when heads of state visit Rwanda, while Rwanda did not issue a statement about what the two leaders discussed. The Angolan leader also visited Kinshasa to seek de-escalation with President Felix Tshisekedi.

It is generally presumed in the EAC that lower tensions between Rwanda and DRC could refocus leaders on the eastern Congo Problem. Kenya’s former President Uhuru Kenyatta, the facilitator for the Nairobi process toured Kinshasa and Goma this week asking that all “foreign armed groups voluntarily surrender and return to their countries of origin” or are forcefully ejected.

Kenyatta called on political leaders to have mercy on civilians and “called upon all local armed groups to unconditionally disarm, embrace dialogue and join the EAC-led Nairobi process in the quest for a lasting solution to the insecurity in the eastern DRC,” according to a communique issued on Wednesday.

The DRC conflict also touches on Uganda whose forces are in DRC to fight off the Allied Defence Forces (ADF. However, countries in the region have seen the eastern DRC conflict derail past cooperation agreements meant to improve interconnectivity, for example between Burundi and Rwanda via Ruzizi river, and the proposed Gitega-Uvira-Kindu railway as well as the pending construction of two major highways connecting Uganda and DRC. 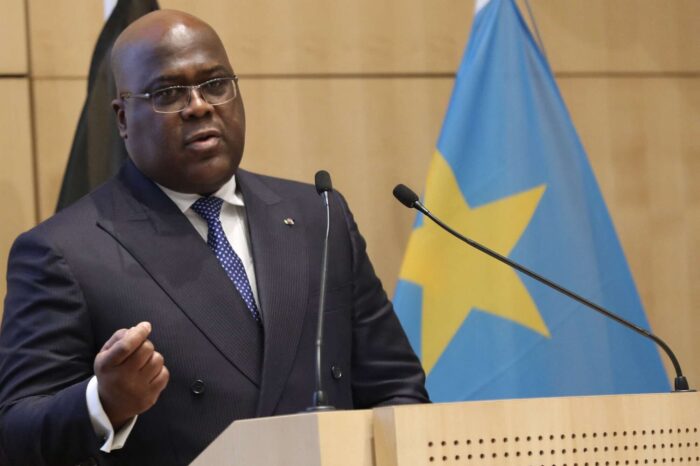