Somalia wants even more drone strikes against the Shabaab

This week, President Hassan gathered federal state leaders in the capital to re-establish unity in the long-running fight to eliminate al Shabaab militia.

When the US Africa Command on December 18 said it had killed 15 key leaders of al Shabaab in a drone strike, at the “request of the Federal Government of Somalia,” Mogadishu released images of the dead Shabaab leaders to the public.

The two strikes were labelled as “self-defence” measures to protect land forces pursuing al Shabaab and the government in Mogadishu said in fact that as many as 88 Shabaabs had been neutralised from their hideout in Adale, some 220km northeast of Mogadishu.

This celebration, including the publication of images, was rare in the government of Mohamed Farmaajo. But his successor Hassan Sheikh Mohamud has indicated he will use every available tool to eliminate the terror group.

Since he came on in May, President Mohamud has encouraged the Somali National Forces and allied regional forces to target one enemy, a rare show of unity between the federal government and the security agencies in the federal states. He has also directed the media to stop covering the al Shabaab side of the story, accusing the terror group of damaging the name of good youth. And when local vigilantes took up arms to support the SNA forces, Mohamud cheered them on.

The biggest of them is the call for more drone strikes. In an interview with Marc Lamont Hill of Upfront on Al-Jazeera earlier in December, he said he wants to loosen military restrictions on drone strikes use to gain a strategic advantage over terror groups.

Drone strikes have in the past been used to neutralise al Shabaab. In the past decade, the US Africa Command has launched at least 220 airstrikes on al Shabaab. In most cases, the military precision was on point. In others, it came with civilian casualties. And families of those killed in the crossfire have protesters to local politicians.

When he came to power, President Joe Biden limited their use to active war zones and required each of those strikes to be approved by the White House. Under that arrangement, field commanders wouldn’t have the leeway to press strike buttons.

Since then, civilian casualties have reduced, according to situation reports US Africa Command (Africom which had indicated in its previous edition that there had been zero casualties.

However, critics such as rights watchdog Amnesty International have argued this data may have weaknesses as it is prepared by those conducting airstrikes, and that the situation reports were only launched in 2020 following years of complaints. The Africom was also accused of labelling every casualty as a terrorist or under-reporting civilian casualties even when attacks happen in residential areas.

Overall, the problem of finding an actual ‘war zone’ in Somalia where al Shabaab have infiltrated communities may make it difficult to conduct airstrikes with precision.

In a previous report, Amnesty International interviewed relatives of those caught in strikes and who tabled proof that their kin had been employees of known organisations who were on duty at the time of the attacks.

Meanwhile, Mogadishu says the controversial contingent of army recruits sent to Eritrea two years ago will boost the fight against al Shabaab. Some 5,000 soldiers will be returning to Mogadishu starting December, having completed specialised training in Asmara, according to Somali Minister for Defence Abdulkadir Mohamed Nur.

Some 400 returnees had already returned by the third week of December.

“It is backbreaking news for the Khawarij (a derogatory reference to al Shabaab, meaning they are deviants from the mainstream Islam and any other assembly that opposes the peace in this country,” the Minister said.

This week, Somali President Hassan gathered federal state leaders in the capital Mogadishu in an effort to re-establish unity in the fight against al Shabaab, but also address mounting concerns of uncertainty over term limits for the leaders, the last of which could hurt the war on terror.

In the meeting, President Hassan Sheikh Mohamud, chairing, was flanked by Prime Minister Hamza Abdi Barre and Deputy PM Salah Jama in the presence of the presidents of the five FMS, from Puntland, Galmudug, Hirshabelle, South West and Jubbaland plus the Mayor of Mogadishu.

The meeting came as state leaders faced opposition to extending their terms. Among the outstanding problem is the antagonism between President Abdiaziz Hassan Laftagareen of the South West State and a group of politicians naming themselves as ‘Coalition of Presidential Candidates.’

They want elections held as planned. But leaders agree a review of supreme laws is needed to define terms and schedule elections. Federal states in Somalia have varying terms and different election schedules. 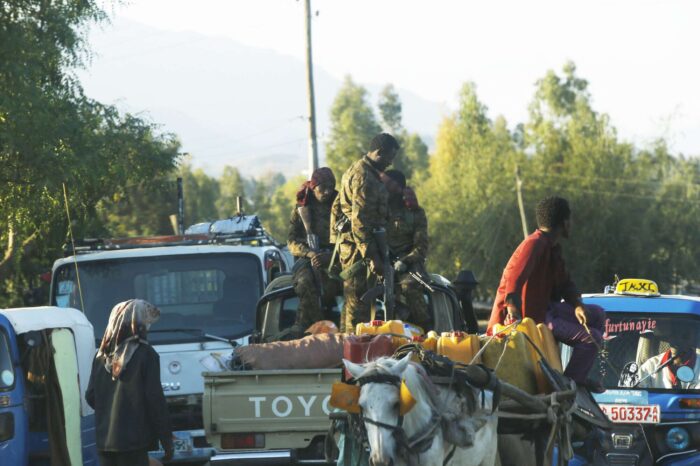 Hope for peace as Eritrean army withdraws from Tigray region