Voting to elect a new leader of South Africa’s ruling party got underway late Sunday, with the race tightening between President Cyril Ramaphosa and his former health minister Zweli Mkhize.

Ramaphosa, 70, is expected to be confirmed in the role that would open the way to his being head of state for a second term, despite a damaging cash-heist scandal and vociferous internal opposition.

But the race looked closer than previously expected Sunday, with reports of party delegates from several provinces shifting support to Mkhize, who Ramaphosa replaced at the peak of the pandemic for alleged malfeasance involving Covid funds.

More than 4,000 delegates were casting their ballots to appoint seven top leadership roles, including party president, deputy president, chair and secretary general, at a conference near Johannesburg.

Ramaphosa had been tipped to win the vote comfortably.

But University of the Witwatersrand lecturer Lumkile Mondi said: “Things are so fluid at the moment. It’s going to be very tight.”

The African National Congress (ANC was shaped by Nelson Mandela to spearhead the struggle to end apartheid. After nearly three decades in power, the rifts in the party are deepeningand their support is declining.

The five-day conference has further exposed those divisions, with allegations of vote-buying and horse-trading ahead of the vote.

The practice “can be divisive” said party spokesman Pule Mabe, adding “there is a commitment on our part to deal with the notion of vote buying”.

“This has been really like a casino,” said Mondi.

Political analyst Levy Ndou of the Tshwane University of Technology confirmed the behind-the scenes negotiations but forecasted that Ramaphosa would still take the vote.

The election, originally scheduled to take place on Friday, is closely watched. The winner of the ANC top job will be expected to ascend to the national presidency in 2024 polls.

Ramaphosa first emerged as the ANC leader in a tightly fought 2017 race after his then boss Jacob Zuma became mired in corruption allegations, vowing to be a graft-buster.

But his clean-hands image has been dented by damning accusations he concealed a huge foreign currency cash burglary at his farm in 2020, rather than report it to the authorities.

He won a reprieve ahead of the conference when the ANC used its majority in parliament to block a possible impeachment inquiry.

His sole rival Mkhize hails from the same province as Zuma, the southeastern KwaZulu-Natal, which has the largest number of party delegates.

As health minister, the 66-year-old medical doctor was lauded for his handling of the coronavirus pandemic.

But his tenure ended abruptly when he resigned amid allegations his son and associates benefited from a 150 million rand ($10.4 million contract for a Covid awareness campaign. He vehemently denies any wrongdoing.

The image of the 110-year-old ANC has been fractured, and stained by corruption, cronyism and a lacklustre economic record.

An organisational report presented at the conference showed that party membership had dropped by a third over the past five years.

Some of those divisions have played out in the open at the conference since it opened on Friday, with Ramaphosa heckled by some delegates before his opening address.

Much of the disturbance came from supporters of Ramaphosa’s political rival, the corruption-tainted former president Zuma.

Some delegates rolled their hands as a sign for “change”.

But Ramaphosa supporters made the number two with their fingers in support of a second term.

“We are saying Ramaphosa for a second term,” said Elton Bantam, a delegate from the Eastern Cape province.

“He has done very well under very difficult circumstances in the first term.” 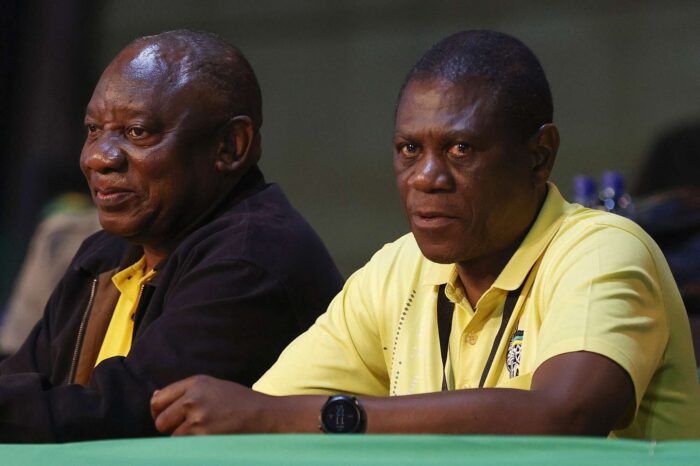