Tanzanian President Samia Suluhu this week may have, with one swing, paved the way for what is shaping up as a busy, intriguing year of politics.

She scrapped a seven-year ban on political rallies imposed by her predecessor John Magufuli, as part of the reconciliation efforts she launched in 2022.

The jury is still out on whether the president’s acquiescence to one of the opposition’s main demands in its quest for democratic reforms across the board will turn out to be a political master stroke on her part or just a trap to tame opponents.

As Tanzania prepares for civic polls in late 2024, followed by the General Election for the presidency and parliamentary seats in 2025, opposition parties will be looking to take full advantage of the New Year gift that they were handed on January 3 to challenge the ruling Chama cha Mapinduzi’s traditional dominance before the actual voting gets underway.

The results of those efforts will be easier to gauge by the end of the year.

But, just by removing the controversial ban on rallies, President Samia as CCM chairperson managed to boost her own popularity ratings within the country by a large margin as she eyes her first electoral bid for the top job that she inherited by constitutional decree after Magufuli’s death in March 2021.

Senior officials of the main opposition party Chadema had already begun sending out strong signals during the closing weeks of 2022 of a grand plan to resume public rallies by early January despite the ban.

Speaking after an all-parties meeting in Dar es Salaam where President Samia announced the ban reversal on Tuesday, Chadema chairman Freeman Mbowe said his party would first take time to discuss the implications in its own internal meetings “and everything else will follow.”

Mr Mbowe described the president’s move as “positive but to be taken with some caution.” He asserted that there were still many other laws that need fixing before Tanzania can call itself a true democracy.

“She also mentioned getting the constitutional reform process underway soon, but it is clear that all of this will require time and constant consultations.

‘‘For us the most important thing she said is that the law review will be done in a fully participatory manner,” Mr Mbowe noted.

Leaders of the 18 registered opposition parties that attended the meeting saluted President Samia, with a few pointing out that political rallies have always been legal under Tanzania’s Constitution.

ACT-Wazalendo leader Zitto Kabwe said the President deserved praise for showing the willingness to “walk the talk in her reconciliation drive, Maridhiano in Kiswahili.

“We know public rallies are our constitutional right. But we also know this right was illegally taken away by a sitting president.

‘‘It took another sitting president to bring us back to normalcy. We as the opposition appreciate the gesture,” Mr Kabwe said.

“It has not been an easy process even getting to this point. But now we can look forward to a year of real changes on the political front as we all work to put this country back on the railway of democracy.”

According to Mr Kabwe, ACT-Wazalendo will use the public rallies to push its own doctrine of “speaking for the people” in matters governance and providing citizens with a platform to voice their own views on such issues.

The lifting of the ban on rallies was not only a plus for President Samia but also for Mr Mbowe, who has faced mounting criticism from within his own party for continuing to back the government-led Maridhiano despite its slow progress while playing down calls by his colleagues to resume political rallies without permission.

Mr Mbowe met with President Samia and CCM secretary-general Abdulrahman Kinana at State House in Dar es Salaam on December 31, days before Tuesday’s get-together of all the parties, which only served to further fuel speculations within Chadema ranks that he had become a sellout and abandoned the party’s cause.

Mr Mbowe has developed a reputation for having a moderate political temperament compared with some of his colleagues, including firebrand exiled deputy chairman Tundu Lissu.

After Tuesday’s meeting, he said that while he would continue to defend the Maridhiano agenda, the ruling establishment should prepare itself for further democratic change “because that is inevitable, whether they like it or not”.

How CCM responds to its chairperson’s decision to give the opposition leeway may also prove instructive within the context of the party’s own internal elections last December, which showed elements of infighting.

The tensions reached a point of potentially threatening CCM’s chances of reasserting its dominant position come election time, prompting President Samia to hint major government reshuffles in the pipeline as she seeks to consolidate her own power base heading towards 2025.

She made the first changes this past week, appointing a new Chief Secretary, Moses Kusiluka, and Head of State Intelligence in Said Masoro.

The naming of a new spy chief and aide-de-camp, both strategic positions requiring the president’s complete trust, triggered expectations of a looming Cabinet overhaul anytime now.

Opposition parties in Tanzania have for years complained about the lack of a level political playing field, especially during elections, and the situation was exacerbated during the Magufuli era, when the civic space was squeezed even tighter.

His autocratic ban on political rallies in 2016 was part of a move to clamp down on political freedom and dissent, and since his death this has formed the basis of Tanzania’s current democratic reforms debate.

The debate itself has centred mainly on opposition demands for a new constitution (Katiba), an independent electoral body (Tume Huru) and restrictions on public political activity, including the ban on rallies.

Removing that ban was among the final recommendations of a government-backed task force spearheading the reforms process, which delivered its final report in October 2022, after several months of public consultations.

The team also considered the demand for an independent electoral system to be in place by the time of the next elections, but it stopped short of endorsing the entire constitutional overhaul that remains a top item on the opposition’s agenda.

On Tuesday President Samia said work had already begun on improving the electoral law while her government was also ready to start formally working on proposed constitutional changes “now.”

“Once we reach a certain stage of amending the elections law we will all sit again as bona fide political parties to discuss the next step,” she stated, adding: “The Katiba issue has been couched in different ways, with some talking about amendments to the current constitution and others proposing a completely new draft.

‘‘I think going forward we will all eventually agree on which is the best route to take.”

She instructed police and other security forces to provide sufficient space and proper protection for parties intending to hold “peaceful” political rallies, but also emphasized that all parties should practice “mature and civilised politics that is constructive and not destructive, without breaking any laws of the land.” 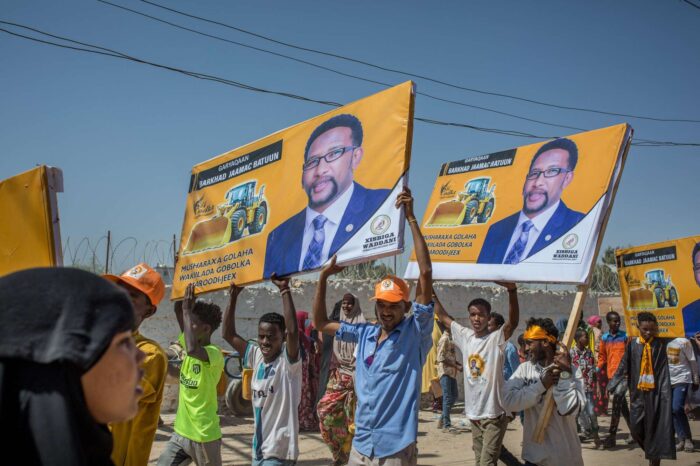 Ethnic clashes hit Somaliland ahead of this year’s elections