The M23 problem, Kigali’s headache and some truths few want to hear

In this first instalment, Gatete Nyiringabo traces the M23 menace in Congo, why it sticks to date and how it has influenced the region’s geopolitics.

Soon after Ugandan President Yoweri Museveni was elected President of the Organisation of African Unity (OAU) – the predecessor to the African Union — the Rwandan Patriotic Front (RPF) composed of Rwandan exiles and refugees, mostly Tutsis, decided to attack Rwanda on October 1, 1990 using his country as a launch pad.

Four years earlier, the Rwandans had helped Museveni rise to power in Kampala and had held key positions in the new Ugandan army. Paul Kagame, the current president of Rwanda, was a senior officer in the Ugandan military intelligence, while his comrade in arms Fred Rwigema, killed at the frontline in the early days of the campaign, had been minister of State for Defence.

Museveni was upset, his election at the helm of the continental body meant the elevation of the former rebel leader, brought to power by the force of arms, as an equal among world peers. And now these “boys,” as Museveni used to call them, risked ruining his moment. The situation seemed all the more upsetting as he had trouble convincing anyone that he was not behind this “aggression” on a neighbouring and brotherly country.

Museveni recounted how it happened while he was attending the United Nations General Assembly in New York: “The news reached me at night, I tried to wake President [Juvenal] Habyarimana in vain. The man was a heavy sleeper.”

Thirty years later, Rwanda was likely in the position Museveni was, following the recent attacks of the Congolese rebel movement of March 23rd, as M23 – in reference to an unfulfilled peace treaty signed on March 23, 2009, between its leaders and the government of the Democratic Republic of Congo (DRC).

It came as Kigali was getting ready to host, in less than a month, 50 heads of state, members of the Commonwealth. While relations between Rwanda and the DRC had finally warmed up with the advent of Felix Tshisekedi to power in Kinshasa, Kigali would have done without another M23 attack, which put it in a delicate geopolitical situation, provoking fresh anti-Rwandan rhetoric in DRC.

A rebel group in Ituri Province, the northeastern Democratic Republic of Congo on September 19, 2020. PHOTO | AFP

Once the war was over, the Congolese Tutsi returned home to their highlands of Kivu, eastern DRC, where in the meantime, anti-Tutsi hatred had been shifted by the genocide perpetrators, who had been defeated back home. Supported by then Zairean strongman Mobutu Sese Seko, the “genocidaires” were targeting the Tutsi in Zaire.

This is how, with the support of Rwanda and Uganda, they took up arms again to defend their community in a struggle that galvanised other Mobutu opponents with their own national grievances, leading them to march on Kinshasa, ousting Mobutu, and replacing him with Laurent Desire Kabila in September 1997.

Once installed, Kabila would fall out with his hitherto allies who had brought him to power, even going as far as collaborating with the same genocidaires. His replacement by his son Joseph Kabila would not change much.

In Rwanda, there was hope with the advent, at last, of a new first name in the Congolese political spectrum since its independence in 1960: in the absence of Antoine, the patriarch; his heir Felix!

All seemed well at first, with the coming to power of Felix Tshisekedi, relations between the DRC and Rwanda were almost repaired. It was mostly the Congolese diaspora, aggrieved by “the aggression of little Rwanda on great Zaire,” who disliked the new rapprochement.

To understand the “M23 problem” one needs to appreciate that there are three types of rebels in the DRC. The first, small militias with no national political agenda, that attack civilians, rarely fight each other, coexist with the regular army (FARDC) and UN peacekeepers (Monusco). These constitute the majority, their interests do not go beyond their communities. There are more than 100.

Then there are foreign groups that exploit the weakness – some read it as an absence – of the state and national army, to use the vast DRC territory as a breeding ground for attacks against their countries of origin. It is in this category that we find the Rwandan genocidaires, known as FDLR, and the Ugandan terrorists known as ADF-NALU. In the past, there were other Sudanese and Ugandan groups – including the infamous Lord Resistance Army (LRA) of Joseph Kony, Congo-Brazzaville groups and even Angolans. The dense forests of the DRC are a festering ground for all manner of armed groups from the region.

Then there is the M23. Congolese citizens, with national grievances linked to lack of security, discrimination of their community and poor governance at large.

The first and second categories of militias are rarely bothered because they do everyone’s business: smuggling, illicit trafficking of minerals, enriching FARDC commanders and multinationals, sponsor political careers in Kinshasa and justify the presence of both UN forces in the DRC for more than 20 years and that of the Force Intervention Brigade (FIB) for 10 years.

The M23 pose a (geo)political problem, because they seize territory, threaten power in the capital Kinshasa, which in turn exposes the weaknesses of the national army, of national politics, and of the UN. To make themselves heard, the M23 are fighting against everyone, including the two other categories of rebel groups, the FARDC, and even Monusco – sometimes all three in a coalition.

According to an “incident monitoring think tank” manned by international researchers in eastern DRC, the Congolese army FARDC is one of the most violent against civilians, at times their killings surpass those of Ugandan Islamists ADF-Nalu, and Rwandan FDLR genocidaires.

Ten years ago, M23 was defeated by a UN-backed Force Intervention Brigade (FIB) made of South African, Tanzanian and Malawian armies. FIB’s mission was to defeat “all the negative forces” in eastern DRC. At the time, M23 posed little resistance and with some political assurances, withdrew into Rwanda and Uganda.

The FIB seems to have since “acclimatised” to Congolese “Rumba” like everyone else, read: doing nothing, and allegedly engaging in illicit trade..

However, a recent parliament audit revealed that of the $74 million allocated to “State of siege” to be sent to Kivu and Ituri, 68 percent was “eaten” in Kinshasa, 12 percent went to unknown expenditure of the army, and only the remaining 20 percent was sent to eastern Congo.

Following the recent attack by the M23 two months ago, the occupation of the towns of Bunagana and the province of Ruchuru on the border with Uganda, Tshisekedi accused Rwanda of supporting the rebel movement, a charge Kigali vehemently denies.

But what alternative did Tshisekedi have? Should he have explained to the Congolese that they have no army? That they never had one? That Mobutu appealed to mercenaries (Jean Schramme, Bob Denard) or to foreign countries (Morocco, Senegal, Chad, Togo) to help keep security and power? There are more than 58 countries contributing troops to Monusco for over 20 years, with dismal results.

Monusco soldiers fire at Codeco militia during the extraction of a Red Cross team which had been ambushed in Dhedja on December 19, 2021 in Ituri, DR Congo. PHOTO | AFP

The FARDC spend their time playing “Sobels” (Soldier by day, Rebel by night) – a sobriquet borrowed from Sierra Leone and Liberia civil war of the 90s. They change clothes to loot the populations they are supposed to protect, collaborate with the FDLR, and sell weapons and ammunition on the black market from Uvira to Beni.

Are the Congolese ready to listen to these truths? The first politician to venture there would immediately sign his political death, a year before the elections, and Tshisekedi is not suicidal. Using Rwanda as a scapegoat seems like the only political card in his hand.

While no proof of these accusations has been brought forth, the streets, from Kinshasa to Brussels, need no further convincing. Unfortunately, accusing Rwanda brings with it the old demons of “Tutsiphobia”. Anti-Tutsi hate speech across DRC has risen to troubling proportions. Congolese social media is awash with anti-Rwanda hate speech, lists of Tutsi members of the FARDC are being published online with rewards promised to anyone who would “cleanse our army”.

Tutsi of Banyamulenge community in South Kivu’s high plateau have left their homesteads after their cattle were looted by various militia, and now live in UN-protected IDP camps.

Images of young militias affiliated to Tshisekedi’s ruling party (UDPS) were seen in the streets of Kinshasa, armed with machetes, stopping cars looking for Tutsis. Several people have been killed by Congolese mobs, for allegedly “looking” Tutsi, including one Lt-Col Joseph Kaminzobe, member of the Banyamulenge community and officer of the regular army, burnt alive by young people in Lweba, South Kivu. Many Congolese Tutsi civilians are reported to have been burnt alive, and at least in one case, Mr Semutobo, a Munyamulenge, was lynched by a mob of young people in Kalima district who posted it online.

A peace agreement signed in Nairobi in December 2013, between the Congolese government and the M23 consisted of:

The agreement has never been implemented for ten years hence, causing the recent attack by the M23.

Ironically, M23 claims it doesn’t want to fight. While they are occupying important towns of Bunagana and Ruchuru in Noth Kivu, they claim to do so to compel the DRC government to implement the Nairobi accords and are ready to relinquish them.

Bunagana in the Democratic Republic of Congo on the border with Uganda. PHOTO | MORGAN MBABAZI | NMG

Amid the accusations against Rwanda and its denials, there is one fact: Kigali is not going to fight the M23.

Indeed options of possible support to the DRC army in fighting M23 were being studied in Rwandan quarters until Congolese politicians started accusing Kigali and FARDC shelled Rwandan territories of Rubavu and Kinigi, heightening tensions between the two neighbours.

As a reminder, the M23 political wing, which has been sheltered in Rwanda for the last ten years, has not left their camps, while those of Uganda, led by Commander Sultani Makenga quietly left Uganda five years ago, and have since been based in DRC forests near the Ugandan border.

Following routs on the battlefield during the war that opposed it to the RPF in the 90s, then Habyarimana’s government accused “Ibyitso Tutsi” internal spies of the loss. My mother, who had run a hairdressing salon in Kigali for 10 years, and who had never been involved in politics, was arrested and detained for a year with thousands of other civilians, for the simple reason that they were Tutsi. Today, it is the turn of any Congolese with “Tutsi facial expressions” to “prove their citizenship”.

I am not worried about the repeated calls by Congolese populists to attack and annex Rwanda, after all, as Wole Soyinka would say, “A tiger does not proclaim his tigritude, he pounces”. What worries me is the resurgence of hate speech and violent killings targeting Congolese Tutsi, and anyone with “doubtful” features; the Luba, Ngbandi, Bashi… all Congolese citizens.

Next week: The way out of this protracted conflict. 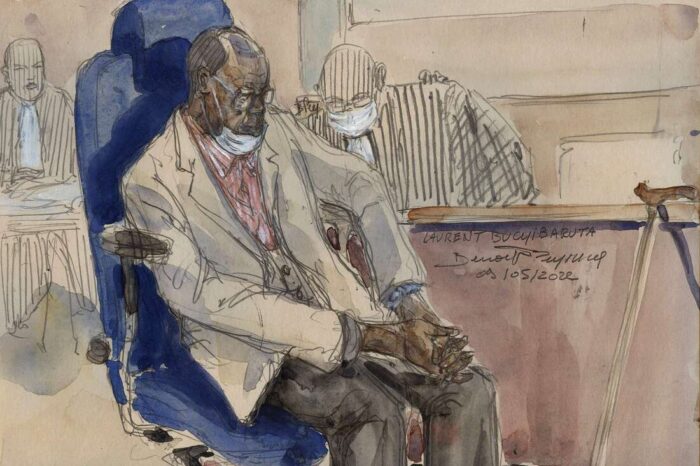