A dispatch from Beijing said Xi labelled ties with Nairobi as “a time-honourfriendship” which will continue under Ruto.

China had sat on the congratulatory message since August 15 as Ruto battled a petition challenging his victory in the Supreme Court. The court on Monday dismissed the petition and validated Dr Ruto’s victory.

At the White House, Karine said in response to a question about the development in Kenya: “We congratulate on his election as President of Kenya. We also congratulate the people of Kenya on the conclusion of a peaceful electoral process. We commend Raila Odinga and other candidates for abiding by the supreme court filing. Transparent electoral processes and the peaceful adjudication of disputes are testaments to the strength of democratic institutions.”

“The United States and Kenya share a strong and longstanding partnership based on a commitment to democracy, security, economic prosperity. We look forward to enhancing this partnership with President Ruto and his new government,” Karine added.

Earlier, Ms Mao Ning, spokesperson of the Chinese Foreign Affairs Ministry, said Beijing is ready to work with Ruto, who will become the fifth President once he takes an oath of office next week on Tuesday.

“We have noted the ruling by Kenya’s Supreme Court, which settled the dispute surrounding the elections within the legal framework. We congratulate Dr Ruto on his presidential election and wish Kenya lasting peace and stability and greater achievement in national development,” Ms Mao told a regular press briefing in Beijing on Tuesday night.

“Kenya is China’s important cooperation partner in East Africa. We look forward to working with Kenya for an even more fruitful comprehensive strategic cooperative partnership.”

China is one of the biggest bilateral creditors to Kenya, with Nairobi owing some $6.5 billion, and reflecting China’s investments in infrastructure developments in the country.

Kenya ranked up the debt as Beijing built the Standard Gauge Railway, bypasses, and port berths at the Lamu Port and the Port of Mombasa, the meter gauge railway extensions to Naivasha and other projects. It also completed the expressway in Nairobi, its first project under a public-private partnership in Kenya.

And as Dr Ruto takes office next week, he will meet a full in-tray of financial needs, including debt repayments that are due. Nairobi was to settle some Ksh117.7 billion (about $987 million on Chinese debt, including Ksh24.7 billion ($207 million in interest payments and almost Kshh93 billion ($780 million in redemptions at the start of this fiscal year.

After the Covid-19 pandemic, Kenya requested a six-month delay on repayments to creditors, including China, last year. It helped the country save some Ksh27 billion ($226 million.

Kenya also owes other bilateral loans to Belgium, Canada, Denmark, France, Germany, Italy, Japan, the Republic of Korea, Spain and the US, even though the repayments must happen in the next four years, falling squarely into Ruto’s administration.

But Ruto’s relations with China will be closely watched, especially after he promised to publish the contents of the controversial contracts for the construction of the standard gauge railway (SGR and expressway, which have been shielded from the public by confidential clauses. His predecessor Uhuru Kenyatta had promised to publish the document on SGR but never fulfilled the promise.

And the Chinese had fought back claims they would attach key assets like Kenya’s Port of Mombasa if Kenya failed to repay the more than $3.6 billion used to construct the SGR.

Dr Ruto told Reuters news agency in an interview at his official residency that he would release the details of the contracts if elected president.

The contents of the contract have been subject to litigation before. The High Court in Mombasa in May ordered the government to provide two activists with agreements relating to the construction.

But Transport PS Joseph Njoroge told the Court the agreements entered between the government and Chinese contractors have non-disclosure clauses.

The government has also argued in court that the move would endanger national security and injure foreign relations with Beijing. 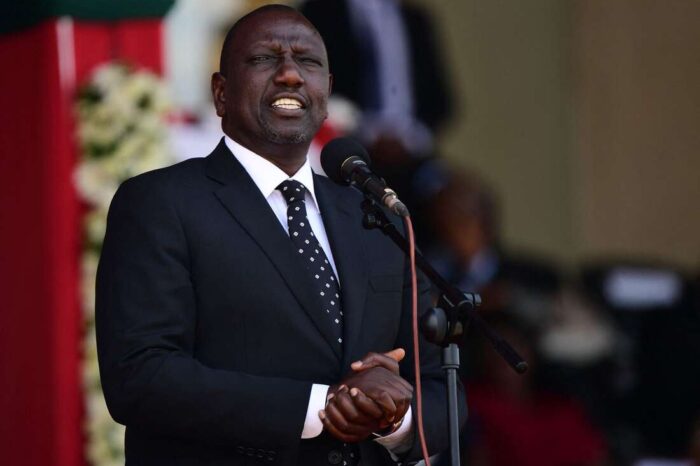