Is this the end of ethnic groupings in determining who becomes king?

Kenya’s General Election may have delivered a lower turnout than previous ones, but it still portrays a changing political matrix in the country where tribe used to play a major role in the polls.

The presidential election pitting Kenya Kwanza Alliance led by Deputy President William Ruto and the Azimio la Umoja One Kenya Coalition headed by former prime minister Raila Odinga showed ethnic groupings are still a major factor in determining who leads the country, but it may not be the biggest group that makes kings.

Experts noted that Kenyans mainly voted according to their socioeconomic interests and social justice.

In Central Kenya, where the majority of the Kikuyu, Kenya’s biggest ethnic group, live, most MPs were replaced, whether they were running on a party endorsed by either of the top presidential contenders.

Central Kenya voted by majority for Mr Ruto, negating any influence President Uhuru Kenyatta, who had endorsed Mr Odinga, may have had.

But the voters also swept aside nearly 70 percent of all incumbent candidates for other elective seats, according to provisional data of results from the Independent Electoral and Boundaries Commission.

Nyaga Kindiki, a lecturer at Moi University, had two brothers overseeing the tallying of the presidential votes on behalf of the two rival groups of Kenya Kwanza and Azimio. He said Kenyans voted for leaders whose ideals they thought would improve their economic status.

“Kenyans are moving from an agrarian economy. That is why Mr Ruto’s slogan of bottom-up and economic freedom gained credence among low-income earners,” Mr Kindiki said.

His brothers, Kithure Kindiki and Isaiah Kindiki, were the chief agents for Mr Ruto and Mr Odinga respectively.

The scholar said Kenyans were interested in leaders’ contributions to improving the economy irrespective of tribe as they are now more educated than in previous polls.

“The elites and educated persons come together because of doing business together. Kenyans now don’t care much who will be president but want opportunity to do business,” Mr Kindiki said.

Kikuyus, who account for nearly 25 percent of registered voters, voted for Mr Ruto overwhelmingly because they were looking for a leader who promised them economic growth, the scholar added.

“The ordinary citizens are suffering, and for economic freedom tribe does not matter. People want to form a society where they are business partners and the only language that matters is business. Due to social justice, the middle class feel that a few individuals are burdening them economically. The middle class feel they are being oppressed,” Mr Kindiki said.

In some past elections, communities sided with each other to support a candidate as politics and power determines distribution of resources and receipt of other state goodies.

The major tribes have therefore always influenced who gets elected to State House, with communities coalescing around their leaders to boost their bargaining power.

Since the majority of voters in Kenya are poor, the debate around elections has gradually shifted from tribe to economic liberation.

Gitile Naituli, a professor of management and leadership at Multimedia University of Kenya, said the 2022 election points to an end to ethnic politics, which is good for democracy.

“This is the end of ethnic politics. Many people voted for President Uhuru Kenyatta because he is one of them thinking he would help. They are now ready to vote for a good person even if he is not one of them,” Mr Naituli said.

Arnold Antonio, a journalism student at Daystar University, said the youth are tired of tribal politics and that the voting pattern for the four Kenyan presidential candidates showed the new tribes are “the haves and the havenots”.

“Since the youth make the biggest number of voters, we have an opportunity to change the political discourse,” Mr Antonio said. 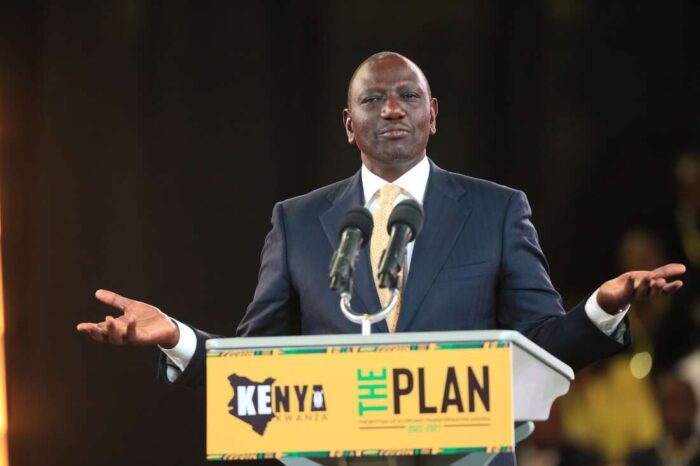