Kenya champions an ‘unAfrican’ openness in the electoral process

Watching the August 9 Kenya elections and the unfolding count, from the US, a commentator noted: “You gotta hand it to the Kenyans. This level of transparency must be a first in the history of presidential elections anywhere, ever. Yes?”

In East Africa, Africa, and indeed parts of the world, many were glued to Kenyan TV feeds and the unfolding drama online.

Next door in Uganda, a viral tweep quipped that “Kenyans are wondering why Ugandans are supporting their candidates more than they [themselves] do. They don’t know this is the only chance we have to freely support any candidate without being arrested.”

On social media, many red-eyed Ugandans were reporting having stayed up all night to watch the TV updates.

The unprecedented transparency came from a decision by Kenya’s Independent Electoral and Boundaries Commission (IEBC to photograph all signed results sheets at every polling station and upload them all to its portal, with the media, political parties, and everyone free to download and tot up the numbers as they came along.

With that, they removed possibly up to 70 percent of the possibility of election rigging that happens in most of Africa, where vote figures are often brazenly tampered with along the way as they journey to the national tally in the capital. Yet, for all the transparency, old habits didn’t die. There were delays of delivery of voting kits to some counties, and elections in two counties (the equivalent to regional states had to be postponed because the wrong materials were sent there.

After the voting, there were returning officers who vanished into the dark with results sheets, and in at some places a few miscreants were caught with pre-ticked ballot papers with the aim of stuffing the boxes. In the end, most polling got running, and the IEBC judged that the hitches were a tiny drop in the ocean.

The results of the new levels of electoral probity were almost immediately evident in the provisional results announced by the media. The two leading presidential contenders, Deputy President William Ruto and former Prime Minister Raila, ran neck and neck, with their numbers swinging wildly as they swapped positions, separated by a whisker.

With turnout of over 60 percent — a historic low — analysts wondered whether there had been high levels of apathy, or the new transparency had only confirmed that the previous disputed elections were indeed stolen, and thus the high percentage had reflected the margin of electoral graft, rather than actual turn-up.

Going into Friday evening, it was still a toss-up as to who of them would take the prize. At tie-up that would send Kenya into uncharted territory looked likely, as functionaries of both candidates claimed victory, as an acrimonious final tally got underway, with both agents of both feuding over every form.

The Kenya constitution and election laws require one to win at least 25 percent of the vote in 24 of the 47 devolved counties, in addition to win 50 percent plus one of the valid votes cast.

The drama, though, kept many Africans riveted. There seemed to be agreement that Kenya had set a new threshold, and the events that played out live had to lead to some response in several countries, because other Africans seeing “unAfrican” electoral openness and fairhandedness previously thought to be impossible, had made a deep impression.

In Tanzania, where the ruling CCM routinely mugs the opposition at election, and where the less authoritarian President Samia Suluhu Hassan took power in 2020 after the abrupt death of her authoritarian predecessor John Magufuli, there was a lot of comment about the “Kenyan example” being witnessed, offering a model for the country’s troubled constitutional and electoral reform.

Ugandans mostly had a feast, using the Kenyan developments to mock the government of President Yoweri Museveni, in power for 36 years now, whose elections are usually marked by widespread crackdown of the opposition, violence, and internet and social media shutdowns.

At a big-picture level, there was something more profound.

There has been a serious ongoing exploration of what “democracy model” is best for Africa.

Until recently, the “development model,” was championed in Ethiopia by the late Meles Zenawi and in East Africa by President Paul Kagame and his ruling Rwanda Patriotic Front had a good run. Highly technocratic, limiting the chaotic and freewheeling – and sometimes highly ethnic – politics at the street level, hard on corruption, and heavily focused on delivering goods and services, was winning out.

The Western-style liberal democracy thrived too, but at its best, it was in the tiny island states like Mauritius and Seychelles, and in smaller countries on mainland Africa like Botswana and Namibia.

In the big African nations like Nigeria, Ghana, Kenya and South Africa, liberal democracy was discredited by grand corruption, incompetence, a dominant ruling party that always manages to smother rivals at the vote, and the ethnic polarisation brought by cutthroat electoral competition.

For a while, too, the model in Uganda, of a quasi-one party dominated system, with strongman Museveni at the top, and an aggressively free market system, captured the imagination, but it became difficult to replicate elsewhere, and at home began to sink under patronage politics as Museveni’s rule grew long.

What happened in Kenya was different and new in that it went over the top, and weaponised electoral openness, at a time when Africa is facing a democracy crisis. By happy coincidence, it happened when the country moved to its first election, where the old ethnic and regional divides were blurred, and a class-based politics around the distribution of economic good and opportunities emerged. Those three factors, made the moment possible.

Now, these might be the enduring contribution of Ruto and his “hustlers”. And Raila’s (and outgoing President Uhuru Kenyatta, for putting a knife in the great Kenyan ethnic divide – that between the Kikuyu and Luo.

And for Africa, as the Raila election slogan went, “Inawezekana.” It’s possible. Both rivals won. 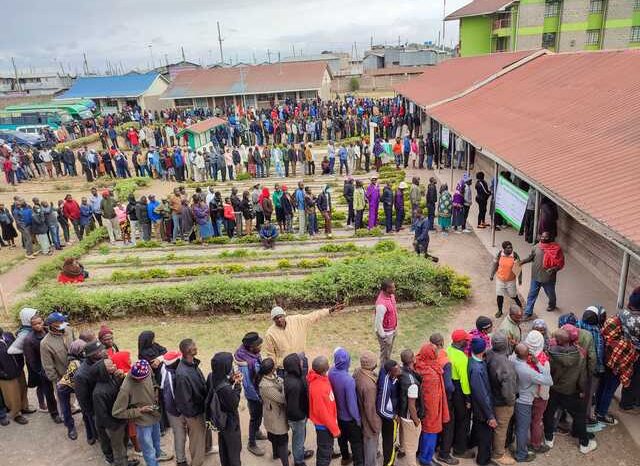 Is this the end of ethnic groupings in determining who becomes king?