Nigeria’s former vice president Atiku Abubakar will be seeking to become the country’s president after the main opposition group endorsed him as their candidate.

This will be his sixth attempt at the presidency.

But the former Customs officer, 75, running on the opposition Peoples Democratic Party (PDP may bring memories of his stint as vice president. He served for two terms under former President Olusegun Obasanjo, from 1999 to 2007.

Now the man from the nomadic Fulani ethnic group, who has become famous in Nigeria for being a wealthy businessman, is seeking to challenge certain norms.

The emergence of the Abubakar has jolted the southerners who felt betrayed by the party, which they expected to have zoned the ticked to them in compensation for their loyalty to the party since 1999.

In Nigeria, the unwritten rule has been that power flows north and south in alternation, part of a tradition to prevent ethnic and religious divisions in Africa’s most populous nation. The north is predominantly Muslim while the south is predominantly Christian. Mr Abubakar beat 12 others in a fierce contest that saw a South River State Governor taking the second position. However, several other northern contestants dropped from the race and endorsed their billionaire rival.

PDP, which ruled for 16 years, was booted out of government by President Muhammadu Buhari of the All Progressives Party (APC in 2015.

The ruling APC currently has 26 aspirants who it is vetting in readiness for its primaries scheduled for June 6, 2022.

Abubakar’s manoeuvres were on display in the opposition primaries. Sokoto State Governor Aminu Tambuwal from North West region stepped down and asked his supporters to cast their votes for Abubakar.

“It is not always about an individual; it must always be about our country,” he said, arguing he stepped down to avoid “jostling” in the party.

Accepting the offer, Abubakar promised to focus on rebuilding and uniting the country if elected.

“Today, the march to rebuild and unite our great country moves forward. I am honoured to be named the presidential candidate of the People’s Democratic Party (PDP,” he wrote on Twitter.

“I look forward to speaking with Nigerians across the country, taking the message of hope and unity as we build one future for one people.”

Abubakar is well educated, holding a Master’s degree in International Relations from Anglia Ruskin University, Cambridge, United Kingdom. But he is also a traditional man, who has four wives and 28 children.

His political life has also been dogged with corruption allegations.

Abubakar’s second term as vice president was marked by a stormy relationship with his boss, Mr Olusegun Obasanjo. After leaving office, Mr Obasanjo wrote a book, My Watch, in which he described the former vice president as a “shameless liar”.

An excerpt from Obasanjo’s book says, “His propensity to corruption. His tendency to disloyalty. His inability to say and stick to the truth all the time. A propensity for poor judgement. His belief and reliance on marabouts. His lack of transparency. His trust in money to buy his way out of all issues and his readiness to sacrifice morality, integrity, propriety truth and national interest for self and selfish interest.”

Although the two reconciled in 2019 when Abubakar contested against President Buhari, those tarnishing images are yet to be erased.

In fact, some of his associates have been jailed in the USA after being found guilty of money laundering.

Abubakar has in the recent past travelled to the US, but under diplomatic cover, as part of a senate delegation led by Nigerian Senate President Bukola Saraki. His status, however, remains uncertain because he had also been issued with a US visa ban.

In 2019, US government officials said the travel ban was waived temporarily by the US State Department after lobbyists mounted a campaign among congressional lawmakers, arguing that the administration should not snub the leading challenger to Nigerian President Muhammadu Buhari in the February 16, 2019 election.

Abubakar’s visa troubles stem from when he served as Nigeria’s vice president, from 1999 to 2007.

He figured prominently in the corruption trial of former US Representative William Jefferson, who was accused of trying to bribe Abubakar in an effort to expand a technology business in Nigeria.

Jefferson was convicted in 2009 and sentenced to 13 years in prison. His sentence was subsequently reduced.

Investigators in 2010 alleged that one of Abubakar’s four wives helped him transfer more than $40 million in “suspect funds” into the United States from offshore shell companies.

At least $1.7 million of that money was bribes paid by German technology company Siemens AG, according to Senate investigators. Siemens pleaded guilty to bribery charges in 2008 and agreed to pay a $1.6 billion fine.

Although Abubakar had repeatedly denied wrongdoing these are some of the ugly sides that will play out during electioneering. 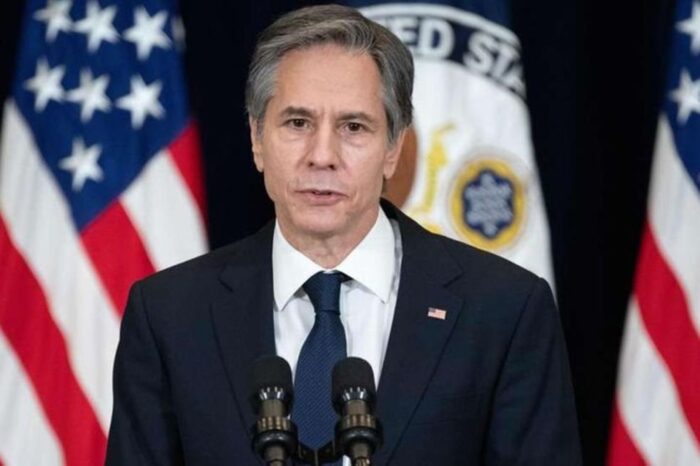