Mediators of the Ethiopia-Tigray conflict are expressing frustration at the unpredictable nature of the war, following fresh allegations of Eritrean involvement.

Just a few weeks ago, talks on a peaceful solution seemed possible. But this week, US Special Envoy for the Horn of Africa, Mike Hammer, said at media briefing that he is unsure how soon parties will lay down their arms.

Mr Hammer said the international community is working with the African Union to pressure Ethiopia to end the war in Tigray. Yet even as he spoke, both sides were raising their war tempo. Eritreans are invading parts of Tigray, returning to a conflict they had been roundly condemned for by the international community and pressured to leave last year.

Read:US not in a rush to sanction officials over Tigray war: envoy

The latest violence comes as the UN International Commission of Human Rights Experts on Ethiopia issued a warning of possible crimes against humanity committed by mostly Ethiopian and Eritrean forces.

The experts report, released this week at the UN General Assembly in New York, revealed that human-rights violations such as extrajudicial killings and rape have been committed by warring sides since fighting began in the northern Tigray region in November 2020.

In addition to shortages of food, medicine, and fuel, as well as severe restrictions on humanitarian access, the fighting has left 20 million people in need of assistance and protection, nearly three-quarters of them women and children.

“The combined effect of these measures, which remain in effect more than a year later, has forced much of the population in Tigray to eat less and sell the harvest and reproductive livestock. Sources also reported an increase in desperate means to survive, such as child marriage and child labour, human trafficking, and transactional sex,” the report, authored by a team led by Kenyan lawyer Betty Murungi, said.

The report described the humanitarian crisis in Tigray as “shocking, both in terms of scale and duration”.

“The widespread denial and obstruction of access to basic services, food, healthcare, and humanitarian assistance is having a devastating impact on the civilian population, and we have reasonable grounds to believe it amounts to a crime against humanity,” it stated.

The Tigray People’s Liberation Front (TPLF, the rebel group that has been fighting government forces since November 2020, said the report “sheds light on the multifaceted genocidal war that has been waged, and continues to be waged, against the people of Tigray”.

However, the Ethiopian government termed the document as biased. Ethiopia’s permanent representative to the UN in Geneva, Zenebe Kebede, said the commission was “politically motivated” and its conclusions were “self-contradictory and biased”.

“There is not any single evidence that shows the government of Ethiopia used humanitarian aid as an instrument of war,” the envoy reportedly said, describing the report as “a mockery” and “rubbish”.

“Therefore we have no option but to reject this report,” Mr Kebede added.

The report suggests further investigations, given the low co-operation from stakeholders and the fact that most of the areas in Tigray are inaccessible due to a blockade imposed on the region.

“There is no confidence on either side that the other can be trusted. That is why we are hoping that whether it’s through the AU-led efforts, the US, or others, we will be able to bring the two parties together,” Mr Hammer said.

“We are hopeful that the more they hear that there is an international effort to stop the war, the more they will be willing to stop engaging in war,” he said.

The recent resumption of fighting comes after a five-month lull. TPLF spokesman, Getachew Reda said there is heavy fighting in several areas along the Tigray-Eritrean border. 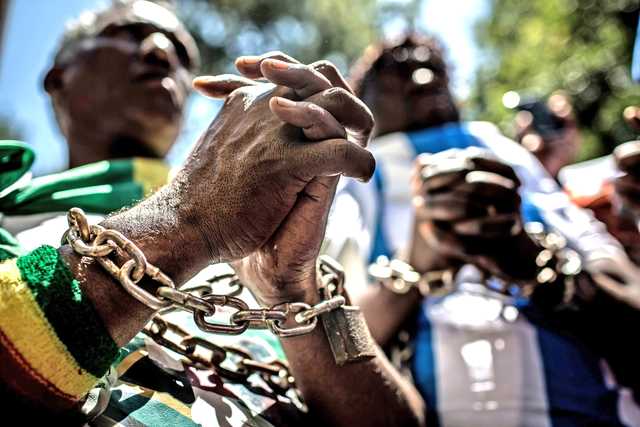