The fate of long-term peace in eastern Democratic Republic of Congo may not be predictable at the start of the year, given the many groups fighting in the region. But that has not discouraged the East African Community Regional Forces (EACRF from pursuing the difficult military diplomacy.

This week, the EACRF, which so far included Kenyan and Burundian troops (Uganda and South Sudan are set to join in have been sending messages of optimism, favouring a political solution and hoping to achieve peace without firing a shot.

On Wednesday, Contingent Commander Col Daniel Rotich led his troops for a reconnaissance patrol within the localities of Rumangabo, Kisigari and Rugari in North Kivu Province, speaking to locals and assuring of security.

“Today’s patrols aimed at assuring the locals of their safety and assessing their needs towards finding a wholesome approach in addressing their challenges for peaceful coexistence for socioeconomic prosperity.”

However, the M23, which had committed to a coordinated, sequenced and systematic withdrawal from Rumangabo, Kishishe and other areas within Eastern DRC, delayed moving out of the second occupied territory which was due on Thursday. They were expected to leave Rumangabo by Friday, according to a new schedule after which the EACRF would take over and enhance security in vacated areas.

Read:M23 to withdraw from second territory

The Forces say the surrender of territory is a long-held move called by leaders at the Luanda Summit in November, but it calls for continued collaboration among the locals, state and non-state actors in the ongoing peace and stability efforts in Eastern DRC.

In reality, however, the EACRF knows pleasing everyone is a tough job and it may just be caught in the middle.

Since M23 moved out of Kibumba on December 22, that there has been relative calm on the various fronts. But both the Congolese army, FARDC, and the M23 have warned there might be further confrontation.

On New Year’s Day, the M23 said the country was still in “turmoil.”

“President [Felix Tshisekedi] has not kept his 2018 election campaign promises, notably those of establishing the rule of law in the DRC, eradicating corruption and putting an end to insecurity in the east of our country,” the rebels said in a statement dubbed ‘message to the nation.’

This year, the military faces two challenges: Doubling down on rebel movements in eastern DRC while guarding the vote due in December 2023.

Also read:Tshisekedi under fire over EAC troops in DRC

The FARDC say it will not negotiate with the M23, which it accuses of collaborating with “the enemy” (Rwanda.

The surrender of territory certainly hasn’t changed their minds, at least going by recent statements by the FARDC which accused the group of selective surrender.

This line of not talking to “the terrorists” is also supported by a large part of the Congolese population who consider that negotiating with the M23 might not be a guarantee for a lasting peace.

This suspicion hasn’t been helped by the M23 leaving certain occupied territories while fighting on other fronts.

“The big challenge is to defeat all the armed groups, not just the M23,” said Jose Nawej, a public policy commentator in Kinshasa.

The DR Congo has the highest number of internally displaced persons: 5.7 million people; 1 million people have found refuge in neighbouring countries and 27 million are in need of humanitarian aid, UN figures show.

They say they are preparing the army to deal with “cross-border crime and cybercrime” and the new policy provides for “the creation of a defence industry that has not existed in the country since independence in 1960,” according to Communication Minister and Government Spokesman Patrick Muyaya. 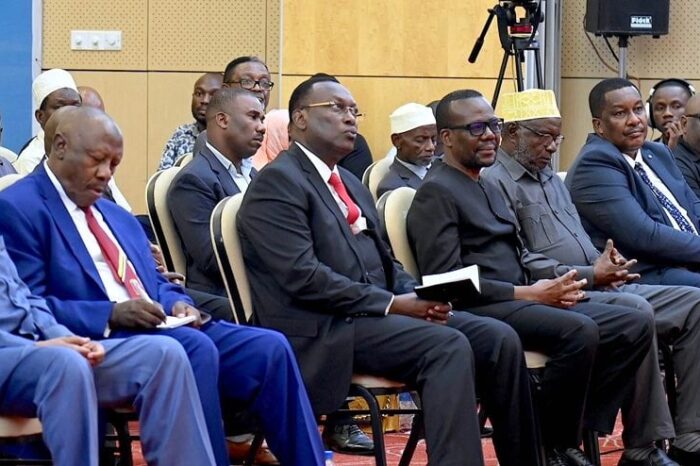