Health authorities across the region are scratching their heads on how to counter the health and economic threats posed by the growing Ebola emergency in Uganda, even as economies struggle to recover from the effects of Covid-19.

This week, President Yoweri Museveni clarified that his government has ruled out Covid-like restrictions that saw borders, schools, entertainment and worship centres shut down for more than one year.

The Ebola fear is not restricted to Uganda as health officials in the region continue to contend with porous borders that put the entire region at risk.

But an even bigger fear is that restrictions at border points could hurt movement of people and goods.

Read: Uganda Ebola outbreak: Here’s what you need to know

“I urge partner states to enhance surveillance and laboratory testing especially at border areas; to implement appropriate infection prevention and control measures and increase risk communication and community awareness of the disease,” he said.

“I ask partner states to consider the deployment of the EAC mobile laboratories to the strategic outbreak hotspots and at the various border point of entries.”

This week, Rwanda reinstated the use of non-contact thermometers across all its border crossings.

Rwandan health workers, in protective gear and face masks, were at the Gatuna and Kagitumba borders, engaging cross-border travellers, taking their temperature and noting down their travel history.

Although Rwanda has not suffered a single Ebola case in the past, Uganda’s Mubende District – the epicentre of this year’s outbreak – is about a six-hour drive from the border.

“The Ministry of Health strongly urges each and every one to be cautious and seriously comply with the preventive measures against Ebola,” reads a statement from Rwanda’s ministry of Health.

It warned against “unnecessary visits and contacts with people who have travelled to areas affected by the Ebola outbreak.”

The public has been advised to report all visitors from Uganda and observe high hygiene.

By Friday, Ebola cases had been detected in Mubende, Kyegegwa, Kagadi and Kassanda across 120 kilometres, the World Health Organisation said in its bulletin.

“Some 400 had been identified and will be monitored as the search continues to identify other people who may be at risk,” it said.

WHO said confirmed cases need supportive care to improve their survival chances. The agency deployed three viral haemorrhagic fever kits with medical supplies, medicines and personal protective equipment to an isolation unit set up in the Mubende Regional Referral Hospital with plans underway for an additional Ebola treatment unit. “More kits will be deployed based on need,” a statement said.

Uganda will also receive $500,000 to support the country’s control efforts and another $300,000 from WHO’s preparedness programme to support readiness activities in the neighbouring countries, including screening, awareness campaigns and isolation centres.

The WHO had earlier in the week praised Uganda’s response and especially testing capacity for Ebola, with 5,000 tests having been done by Wednesday.

But health officials in the affected areas are expressing frustration that the localised measures imposed to contain the spread were being violated, and suggested expanded lockdown measures.

So far, there are 31 confirmed cases and six confirmed deaths.

Dr Henry Mwebesa, the Director General of Health Services at the Ugandan Health ministry, said some people suspected to have contracted the disease had escaped from Mubende Hospital a week ago before samples taken from them had been tested. Results for one of the said people turned out positive, but his whereabouts remain unknown.

Officials say they have since tightened security at quarantine facilities, but are still worried of a possible community infection.

Yet when detected and treated early, the risk of dying from Ebola is significantly reduced.

As the emergency escalated this week, the country has reported that five doctors and an anaesthetist have been gone into isolation for treatment after contracting Ebola in the line of duty.

“Initially, there were issues with personal protective equipment. In the areas where the patients reached first, the health workers there were not having PPEs,” Dr Herbert Luswata, the president of an association of doctors in the country said.

One of the health workers, a Tanzanian doctor, died on Saturday while receiving treatment. He was in Uganda pursuing a Master of Medicine in Surgery course at Kampala International University.

Sheila Nduhukire, the spokesperson of the National Medical Stores, says they have since supplied adequate PPE stocks to the Mubende Regional Referral Hospital.

On Friday, Health officials in Kenya said they were investigating a suspected case of Ebola in Kakamega County, western Kenya. The patient had recently travelled to eastern Uganda to visit relatives, officials said.

Last week, the Kenyan government issued an Ebola alert and called for screening of travellers at entry points on the border with Uganda.

The high risk regions are Kagera, Mwanza, Kigoma, Geita and Mara in the Great Lakes zone and Kilimanjaro, Dar es Salaam, Arusha and Songwe for their high interaction with foreign citizens. 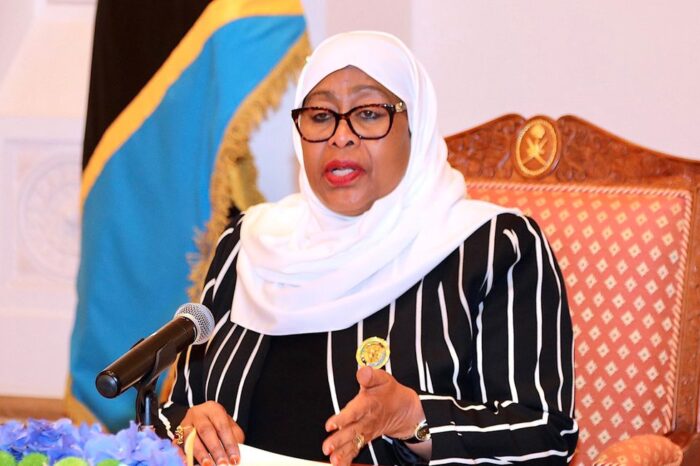