Relief for Zambia as China joins its debt resolution mechanism

Zambia’s push for a resolution to the debilitating debt crisis received a major lift after China committed to join a creditor committee as part of international efforts to restructure Lusaka’s debt.

China, which is the southern African country’s largest creditor, made the commitment to join the Common Framework at the recent International Monetary Fund (IMF meeting after long drawn out negotiations with President Hakainde Hichilema’s administration.

President Hichilema has been battling the debt crisis since coming into power last year.

The Zambian leader took to Twitter to thank China for joining international efforts to help his country restructure its debt.

“We engaged with China and other creditors to negotiate a debt resolution package,” he said.

“Thank you China for joining the Common Framework. This couldn’t be done in 10 years; (but we have done it eight months.”

Ahead of the IMF meetings, Zambia’s Finance Minister Situmbeko Musokotwane had expressed frustration over the debt restructuring process, which he said had “stalled”, largely because of China’s reluctance to join the Common Framework.

Zambia in 2020 became the first country to default in the Covid-19 pandemic after its debt burden shot to over 120 percent of its gross domestic product.

A $1.4 billion three-year extended credit facility with the IMF in December last year had become uncertain because of Zambia’s inability to agree on a debt restructuring process with China.

Lusaka was expected to restructure its $15 billion of external debts in order to secure the IMF loan by June this year.

Zimbabwe’s Finance Minister Mthuli Ncube said the Chinese move augured well for other African countries that found themselves in a similar situation.

Zambia requested debt relief under the Common Framework, a programme linking the Paris Club – a group of officials from major creditor countries whose role is to find coordinated and sustainable solutions to the payment difficulties experienced by debtor countries – and the G20’s efforts to provide debt service relief in developing countries linked to the Covid-19 pandemic.

Observers say Zambia’s situation will provide a test on how to deal with debt crises that many African countries face.

Beijing has emerged as the largest lender for most African countries in the last decade.

At the end of 2021, the Chinese government and its entities were owed $5.78 billion by Zambia, government data shows.

Zambia also owed multilateral lending agencies such as the IMF $1.2 billion while another $3 billion was in international bonds.

In a research brief penned by Deborah Brautigam and Yinxuan Wang from the China Research Initiative (CARI titled Zambia’s Chinese debt in the pandemic era, the researchers noted that the Lungu administration could have understated the country’s debt to China.

The researchers warned of complications in the debt restructuring negotiations given the nature of the debt acquired by the previous Zambian government from Chinese institutions.

“Official sources, including the World Bank and Zambia’s Ministry of Finance have not provided accurate information on the stock of debt owed by Zambia to Chinese lenders,” the CARI research paper says.

“Given the complicated situation with at least 18 Chinese lenders having provided loan funding to the Zambian government and its state-owned firms, reaching consensus on burden sharing is likely to prove exceptionally difficult.”

“Yet suspension of debt service and longer repayment periods are unlikely to be enough,” the CARI researchers added.

“Now, the IMF will act as an ‘honest broker’ in determining the level of write down required to bring Zambia to debt sustainability.”

In one of his last official events as president, Mr Lungu commissioned the Simon Mwansa Kapwepwe International Airport in the country’s second largest city of Ndola and the commercial hub of its main copper producing region.

The massive project cost $400 million and was financed through a government-to-government loan from China’s Export-Import Bank.

SomeZambiansfelt that the infrastructure will turn into white elephants due to the economic slump.

Aviation Industry Cooperation of China, which constructed the airport, said the facility has a 3.5 kilometre runway and the terminal could handle as many as a million passengers a year.

Zambia’s economy has been squeezed by an avalanche of Chinese debt and at some point there were fears that the Asian country will take over the power utility,ZambiaElectric Power Corporation (Zesco. 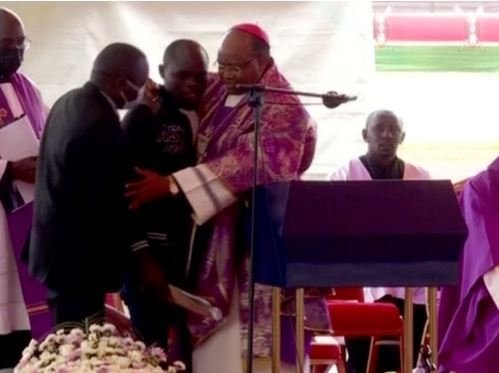